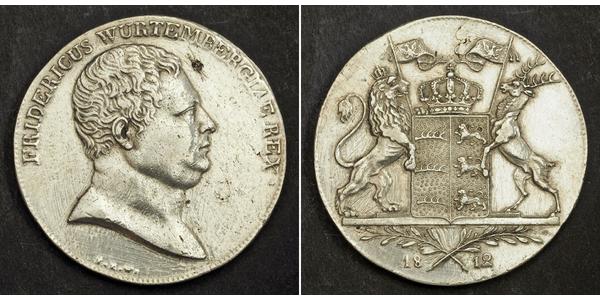 Reverse: Crownedcoat-of-arms, supported by a crowned lion and a stag. Date (18-12) in exergue, split by olive-sprays in saltire.

Born in Treptow an der Rega, today Trzebiatów, Poland, Frederick was the eldest son of Frederick II Eugene, Duke of Württemberg, and Sophia Dorothea of Brandenburg-Schwedt. Frederick's father was the third son of Charles Alexander, Duke of Württemberg, and Frederick was thus the nephew of the long-reigning duke Charles Eugene(German: Karl Eugen). Since neither Duke Charles Eugene nor his next brother, Louis Eugene (German: Ludwig Eugen), had any sons, it was expected that Frederick's father (also named Frederick) would eventually succeed to the Duchy, and would be succeeded in turn by Frederick.

That eventuality was however many years in the future, and the birth of a legitimate son to either of his uncles would preempt Frederick's hopes conclusively. Further, his uncle the Duke was not disposed to give any member of his family any role in affairs of government. Frederick therefore determined - like his father - on a military career at the court of Frederick the Great. This later drew Frederick and his family into the Prussian king's network of marriage alliances - in 1776 his sister Sophie would marry to Tsesarevich Paul, future Emperor of Russia and son of Empress Catherine II. These family ties to Russia had immediate consequences for Frederick and far-reaching ones for Württemberg during the reorganisation of Europe in the wake of the 1814 Congress of Vienna.

In June 1774 he entered the Prussian Army as an oberst in the Kürassierregiment Lölhöffel, rising to a commander in the same unit in December 1776. He fought with it in the War of the Bavarian Succession. In 1780 he took over the 2nd Dragoon Regiment (Krockow). Frederick married Duchess Augusta of Brunswick-Wolfenbüttel (sixteen years old and thus ten years his junior) on 15 October 1780 at Braunschweig. She was the eldest daughter of Charles William Ferdinand, Duke of Brunswick-Lüneburg and Princess Augusta of Great Britain and thus a niece of George III of Great Britain and sister to Caroline of Brunswick, the future wife of George IV. The marriage was not a happy one - even during her first pregnancy in 1781 she wished to separate but was persuaded to stay with Frederick by her father. Though they had four children, Frederick was rumored to be bisexual, with a coterie of young noblemen[citation needed]. He had a good relationship with the King of Prussia and regularly took part in cabinet meetings, though this was clouded by his sister Elizabeth's 1781 marriage to Francis of Austria, later the last Holy Roman Emperor and the first Emperor of Austria. Frederick the Great feared that Prussia would become isolated by a closer relationship between Russia and Austria, whose rulers were both Frederick of Württemberg's sisters and (probably wrongly) blamed him for Francis' marriage.

In 1781 Frederick resigned from the Prussian Army as a major general and the following year he accompanied Sophie and her husband to Russia, after a Grand Tour of Europe that the imperial couple had undertaken. Pleased with the well-spoken and confident young man, Catherine II appointed Frederick Governor-General of Eastern Finland, with his seat at Viipuri. From June to October 1783 he was also in command of a 15000-20000 strong corps in Kherson during the Russo-Turkish War, but he was not significantly involved in combat.

Frederick's relationship with his wife became more and more strained. He was reportedly violent towards her and after a play during a visit to Saint Petersburg in December 1786, Augusta asked for protection from Empress Catherine. She gave Augusta asylum and ordered Frederick to leave Russia. When Sophie protested at the treatment of her brother, Catherine replied, "It is not I who cover the Prince of Württemberg with opprobrium: on the contrary, it is I who try to bury abominations and it is my duty to suppress any further ones." Catherine's relationship with Frederick's brother-in-law Paul had also broken down and so Frederick had to help protect his sister as she came under fire from Catherine. Augusta was sent to live at Lohde Castle in Western Estonia but died on 27 September 1788 after miscarrying an illegitimate child and being refused any medical help to cover up the pregnancy. In the same year, Frederick sold his residence in Vyborg, known as Monrepos.

In the meantime, Frederick's succession to the throne of Württemberg had become more and more likely. In June 1789 he traveled to Paris to see the first stages of the French Revolution at first hand, before moving to Ludwigsburg the following year, much to the displeasure of his uncle Carl Eugen, who was still on the throne. His father came to the throne in 1795 and finally Frederick gained his long-wished political influences. His Brunswick-born father helped him make contact with the British royal family - Frederick's first wife had been a niece of George III. On 18 May 1797, Frederick married George's eldest daughter Charlotte at the Chapel Royal in St James's Palace.

On 22 December 1797, Frederick's father, who had succeeded his brother as Duke of Württemberg two years before, died, and Frederick became Duke of Württemberg as Frederick III. He was not to enjoy his reign undisturbed for long, however. In 1800, the French army occupied Württembergand the Duke and Duchess fled to Vienna. In 1801, Duke Frederick ceded the enclave of Montbéliard to the French Republic, and received Ellwangen in exchange two years later.

In the Reichsdeputationshauptschluss, which reorganized the Empire as a result of the French annexation of the west bank of the Rhine, the Duke of Württemberg was raised to the dignity of Imperial Elector. Frederick assumed the title Prince-Elector (German: Kurfürst) on 25 February 1803, and was thereafter known as the Elector of Württemberg. The reorganization of the Empire also secured the new Elector control of various ecclesiastical territories and former free cities, thus greatly increasing the size of his domains.

In exchange for providing France with a large auxiliary force, Napoleon recognized the Elector as King of Württemberg on 26 December 1805. Friedrich became King Frederick I when he formally ascended the throne on 1 January 1806, and was crowned as such on the same day at Stuttgart. Soon after, Württemberg seceded from the Holy Roman Empire and joined Napoleon's Confederation of the Rhine. Once again, the assumption of a new title also meant territorial expansion, as the territories of various nearby princes were mediatized and annexed by Württemberg. As a symbol of his alliance with Napoleon, Frederick's daughter, Princess Catharina, was married to Napoleon's youngest brother, Jérôme Bonaparte. The newly elevated king's alliance with France technically made him the enemy of his father-in-law, George III. However, the King's dynastic connections would enable him to act as a go-between with Britain and various continental powers. In 1810, Frederick banished the composer Carl Maria von Weber from Württemberg on the pretext that Weber had mismanaged the funds of Frederick's brother, Louis, for whom Weber had served as secretary since 1807.

During the German Campaign of 1813, Frederick changed sides and went over to the Allies, where his status as the brother-in-law of the British Prince Regent (later George IV) and uncle to the Russian Emperor Alexander I helped his standing. After the fall of Napoleon, he attended the Congress of Vienna and was confirmed as King. At Vienna, Frederick and his ministers were very concerned to make sure that Württemberg would be able to retain all the territories it had gained in the past fifteen years. Frederick's harsh treatment of the mediatized[citation needed] princes within his domain made him one of the principal targets of the organization of dispossessed princes, which hoped to gain the support of the Powers in regaining their lost sovereignty. In the end, however, Austria, which was seen as the natural ally of the princes, was more interested in alliance with the medium-sized German states like Württemberg than in asserting its traditional role as protector of the smaller sovereigns of the old Empire; and Frederick was allowed to retain his dubiously acquired lands. Frederick, along with the other German princes, joined the new German Confederation in 1815. He died in Stuttgart in October of the next year.

He was very tall and obese: behind his back he was known as "The Great Belly-Gerent". Napoleon remarked that God had created the Prince to demonstrate the utmost extent to which the human skin could be stretched without bursting.[1] In return, Frederick wondered how so much poison could fit in such a small head as Napoleon's.