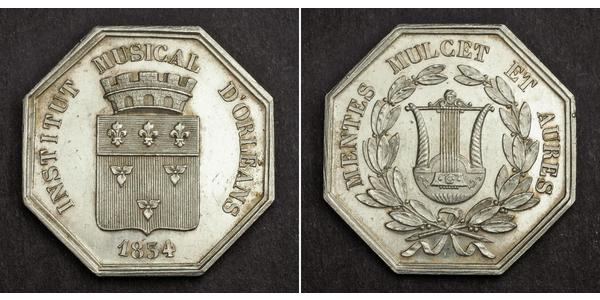 Reverse: Ornate harp within wreath. Motto of the Musical Institute of Orléans around. Legend: MENTES MULCET ET AURES ("It enchants the eyes and the ears.")

Orléans is a prefecture and commune in north-central France, about 111 kilometres (69 miles) southwest of Paris. It is the capital of the Loiret department and of the Centre-Val de Loire region. Orléans is located on the Loire River where the river curves south towards the Massif Central. In 2015, the city had 114,644 inhabitants, and the population of the urban area was 433,337. Île d'Orléans in Quebec, Canada is named after Orleans in France as is Orléans, Ontario and New Orleans, Louisiana. (French: La Nouvelle-Orléans).