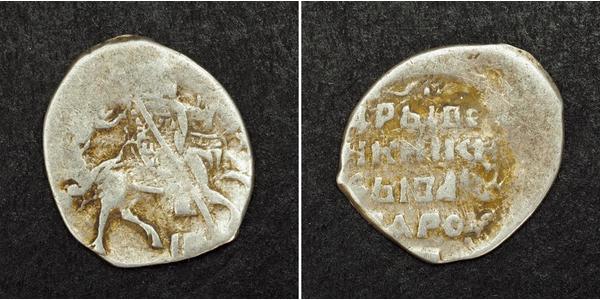 Obverse: The Tsar as St. George on horse, killing dragon with spear in his right hand.

Ivan IV Vasilyevich, Ivan Chetvyorty, Vasilyevich), known in English as Ivan the Terrible (Ivan Grozny) (25 August 1530, Moscow - 28 March [O.S. 18 March] 1584, Moscow) was Grand Prince of Moscow from 1533. His long reign saw the conquest of the Khanates of Kazan, Astrakhan, and Siberia, transforming Russia into a multiethnic and multiconfessional state spanning almost 1 billion acres, growing during his term at a rate of approximately 130 square kilometers a day. Ivan oversaw numerous changes in the transition from a medieval nation state to an empire and emerging regional power, and became the first Tsar of a new and more powerful nation.

Historic sources present disparate accounts of Ivan's complex personality: he was described as intelligent and devout, yet given to rages and prone to episodic outbreaks of mental illness. One notable outburst may have resulted in the death of his groomed and chosen heir Ivan Ivanovich, which led to the passing of the Tsardom to the younger son: the weak and possibly mentally retarded Feodor I of Russia. His contemporaries called him "Ivan Grozny" the name, which, although usually translated as "Terrible", is actually associated with might, power and strictness, rather than horror or cruelty.

Only 1$ shipping on each additional combined item!