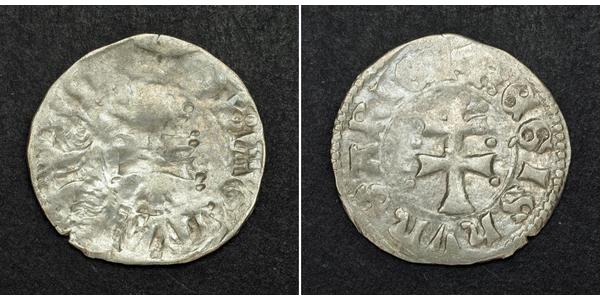 In coin collecting, brockage refers to a type of error coin in which one side of the coin has the normal design and the other side has a mirror image of the same design impressed upon it. Brockage errors are caused when an already minted coin sticks to the coin die and impresses onto another blank that hasn't been struck yet, pressing a mirror image of the other coin into the blank.

The term Saracen carried the connotation of people living on the fringes of settled society, living off raids on towns and villages, and eventually became equated with both the "tent-dwelling" Bedouin as well as sedentary Arabs. Church writers of the period commonly describe Saracen raids on monasteries and their killing of monks. The term and the negative image of Saracens was in popular usage in both the Greek east as well as the Latin west throughout the Middle Ages. With the advent of Islam, in the Arabian peninsula, during the seventh century among the Arabs, the terms strong association with Arabs tied the term closely with not just race and culture, but also the religion. The rise of the Arab Empire and the ensuing hostility with the Byzantine Empire saw itself expressed as conflict between Islam and Christianity and the association of the term with Islam was further accentuated both during and after the Crusades.

Louis I the Great (Hungarian: I. (Nagy) Lajos, Croatian: Ludovik I) (5 March 1326, - 10 September 1382, Nagyszombat/Trnava) was King of Hungary, Croatia, Dalmatia, Jerusalem and Sicily from 1342 and of Poland from 1370. Louis was the head of the senior branch of the Angevin dynasty. He was one of Hungary's most active and accomplished monarchs of the Late Middle Ages, extending her territory to the Adriatic and securing Dalmatia, with part of Bosnia and Bulgaria, within the Holy Crown of Hungary. He spent much of his reign in wars with the Republic of Venice and in competition for the throne of Naples, the former with some success and the latter with little lasting results.

Louis, named for his uncle, Saint Louis of Toulouse, was the eldest son of Charles I of Hungary and Elisabeth of Poland, daughter of Ladislaus the Short and sister of Casimir III of Poland, the Piasts who reestablished kinship in Poland. He was designated heir of his father at birth. In due time, he became king of Hungary, at the death of his father in 1342. He was crowned only a few days later on 21 July. Louis led his armies many times in person. Besides his best known campaigns, he fought in Bulgaria, Bosnia, Wallachia, and against the Golden Horde. The first Ottoman-Hungarian clash occurred during his reign. He was an Alexander type leader. He led assaults personally and climbed city walls together with his soldiers. As an excellent commander and a gallant fighter Lajos resembled his exemplar, King Saint Ladislaus. He shared the privations and hardships of camp life with his soldiers. Although few legends were woven around his name, one incident casts light on his courage. When one of his soldiers who had been ordered to explore a ford was carried away by the current, the King plunged into the torrent without hesitation and saved the man from drowning.

Under his reign lived the most famous epic hero of Hungarian literature and warfare, the king's Champion: Nicolas Toldi. John de Cardailhac, patriarch of Alexandria and envoy of the Vatican,(who saw the most European countries and monarchs) wrote: "I call God as my witness that I have never seen a monarch more majestic and more powerful... or one who desires peace and calm as much as he."