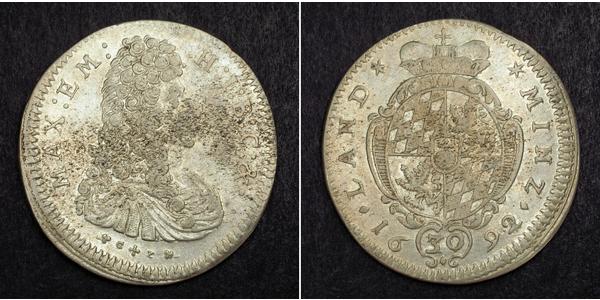 Mint Year: 1692 Mint Place: Munich Denomination: 30 Kreuzer (½ Gulden) Reference: KM-356 ($140 in VF / $275 in XF!) Condition: Mint-made planchet-imperfections (impurities in the silver alloy, which resulted in tiny pits in the planchet, which were there when the coin was struck), otherwise XF! Weight: 11.74gm Diameter: 34mm Material: Silver

Maximilian II (11 July 1662 – 26 February 1726), also known as Max Emanuel or Maximilian Emanuel, was a Wittelsbach ruler of Bavaria and a Kurfürst of the Holy Roman Empire. He was also the last governor of the Spanish Netherlands and duke of Luxembourg. An able soldier, his ambition led to conflicts that limited his ultimate dynastic achievements.

He was born in Munich to Ferdinand Maria, Elector of Bavaria and Henriette Adelaide of Savoy (d.1676). His maternal grandparents were Victor Amadeus I of Savoy and Christine Marie of France, daughter of King Henri IV.