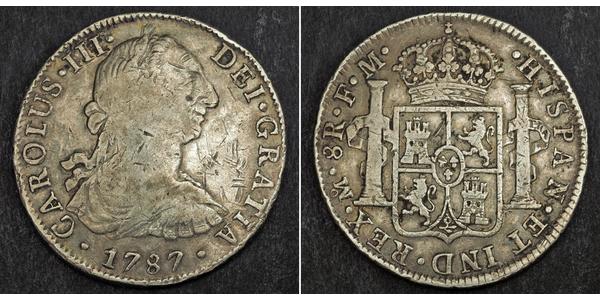 On August 10, 1759, his half-brother Ferdinand VI of Spain died, and Charles III left the Neapolitan/Sicilian dominions to go to Madrid. His second son  would eventually rule in Spain as Charles IV. His third son would unify  the Kingdom of Naples and Kingdom of Sicily to form the Kingdom of the  Two Sicilies and ruled as Ferdinand.

As king of Spain, his foreign policy was marked by  the alliance with France (the Family Compacts) and the conflict with  Britain over the control of the American possessions. His support for  France in the close of the Seven Years' War led to the loss of Florida  to the British, although this was partly compensated by the acquisition  of the French Louisiana. The rivalry with Britain also led him to  support the American revolutionaries in their War of Independence  despite his misgivings about the example it would set for the Spanish  Colonies. During the war, Spain recovered Minorca and Florida, but  failed to capture Gibraltar.

His internal government was, on the whole,  beneficial to the country. He began by compelling the people of Madrid  to give up emptying their slops out of the windows, and when they  objected he said they were like children who cried when their faces  were washed. In 1766, his attempt to force the madrileños to adopt the French dress for public security reasons was the excuse for a riot (Motín de Esquilache)  during which he did not display much personal courage. For a long time  after, he remained at Aranjuez, leaving the government in the hands of  his minister Pedro Pablo Abarca de Bolea, Count of Aranda. Not all his  reforms were of this formal kind.

Charles was a thorough despot of the benevolent  order, and had been deeply offended by the real or suspected share of  the Jesuits in the riot of 1766. He therefore consented to the  expulsion of the order, and was then the main advocate for its  suppression. His quarrel with the Jesuits, and the recollection of some  disputes with the Pope he had had when King of Naples turned him  towards a general policy of restriction of what he saw as the overgrown  power of the Church. The number of reputedly idle clergy, and more  particularly of the monastic orders, was reduced, and the Spanish  Inquisition, though not abolished, was rendered torpid.In the meantime,  much antiquated legislation which tended to restrict trade and industry  was abolished; roads, canals and drainage works were established. Many  of his paternal ventures led to little more than waste of money, or the  creation of hotbeds of jobbery; yet on the whole the country prospered.  The result was largely due to the king, who even when he was  ill-advised did at least work steadily at his task of government. He  created the Spanish Lottery and introduced Christmas cribs following  Neapolitan models. During his reign, the movement to found "Economic  Societies" (a rough prototype Chamber of Commerce) was born.

His example was not without effect on some of the  nobles. In his domestic life King Charles was regular, and was a  considerate master, though he had a somewhat caustic tongue and took a  rather cynical view of humanity. He was passionately fond of hunting.  During his later years he had some trouble with his eldest son and  daughter-in-law. If Charles had lived to see the beginning of the  French Revolution he would probably have been frightened into reaction.  As he died on the 14th of December 1788 he left the reputation of a  philanthropic and philosophic king, still nicknamed "el rey alcalde"  ("the king mayor") because of the public works in Madrid. In spite of  his hostility to the Jesuits, his dislike of friars in general, and his  jealousy of the Spanish Inquisition, he was a very sincere Roman  Catholic. Charles was responsible for granting the title "Royal  University" to the University of Santo Tomas in Manila which is the  oldest in Asia.