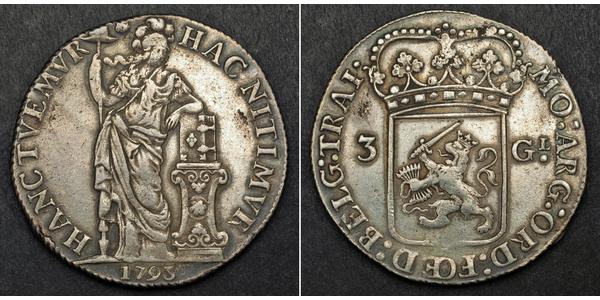 Obverse: Standig togate personification of the Dutch Republic (Hollandia), wearing plummed helmet, holding reversed spear, topped by a hat and leaning on book, placed on a decorated column. Date (1793) below. Legend (motto) : HANC TVEMVR - HAC NITIMVR  / 1793 Translated:"This we defend, by this we strive!"

Utrecht,       city and municipality is the capital and most populous city of the       Dutch province of Utrecht. In 1579 the northern seven provinces   signed     the Union of Utrecht, in which they decided to join forces   against     Spanish rule. The Union of Utrecht is seen as the beginning   of the Dutch     Republic. In 1580 the new and predominantly Protestant   state   abolished   the bishoprics, including the one in Utrecht, which   had   become an   archbishopric in 1559. The stadtholders disapproved of   the   independent   course of the Utrecht bourgeoisie and brought the   city   under much more   direct control of the Holland dominated   leadership of   the republic. This   was the start of a long period of   stagnation of   trade and development   in Utrecht, an atypical city in   the new state,   still about 40% Catholic   in the mid-17th century, and   even more so   among the elite groups, who   included many rural   nobility and gentry   with town houses there. The   city, which was held   against its will in   the states of the Republic,   failed to defend   itself against the French   invasion in 1672 (the   Disaster Year). The   lack of structural   integrity proved to be the   undoing of the central   section of the   cathedral of St Martin church when   Utrecht was   struck by a tornado in   1674. The Treaty of Utrecht in 1713   settled   the War of the Spanish   Succession. In the early 19th century,   the   role of Utrecht as a   fortified town had become obsolete.