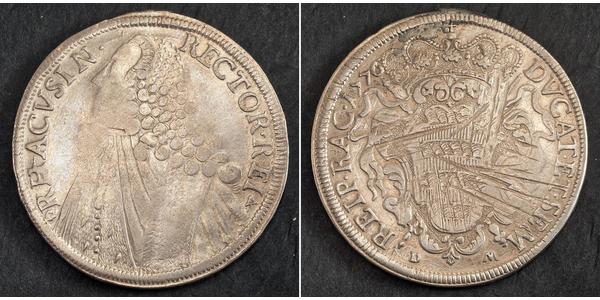 The Republic of Ragusa (or Republic of Dubrovnik) was a maritime republic centred on the city of Ragusa (Dubrovnik, today in southernmost Croatia), in Dalmatia, from the 14th century AD until 1808. It reached its peak in the 15th and the 16th century before being conquered by Napoleon Bonaparte's Empire of France in 1808. It had a population of about 30,000 people, of which 5,000 lived within the city walls.

The Republic ruled a compact area of southern Dalmatia - its final borders were formed by 1426 - comprising the mainland coast from Neum to the Prevlaka peninsula as well as the Pelješac peninsula and the islands of Lastovo and Mljet, as well as a number of smaller islands off Lastovo and Dubrovnik such as Kolocep, Lopud, and Šipan.

In 1683 the Turks were defeated in the Battle of Kahlenberg outside Vienna. The Field marshal of the Austrian army was Ragusan Frano Dživo Gundulic/Gondola. In the Treaty of Karlowitz of 1699, the Ottomans ceded all of Hungary, Transylvania, Slavonia, Dalmatia and Podolia to the victorious Habsburgs, Venetians, and Poles.

The Ottoman Empire was no longer a threat to Christian Europe. After this, Venice captured a part of Ragusa's inland area and approached its borders. They presented the threat of completely surrounding and cutting off Ragusa's trade inland. In view of this danger and anticipating the defeat of the Turks in 1684 Ragusa sent emissaries to the Austrian Emperor Leopold in Vienna, hoping that the Austrian Army would capture Bosnia. Fortunately for the Republic, the Ottomans retained their control over their hinterland. With the 26 January 1699 peace agreement, the Republic of Ragusa ceded two patches of its coast to the Ottoman Empire so that the Republic of Venice would be unable to attack from land, only from the sea. One of them, the northwestern land border with the small town of Neum, is today the only outlet of present-day Bosnia and Herzegovina to the Adriatic Sea. The southeastern border village of Sutorina later became part of Montenegro, which has coastline to the south. Ragusa continued its policy of strict neutrality in the War of Austrian succession (1741–48) and in the Seven Years' War (1756–63).