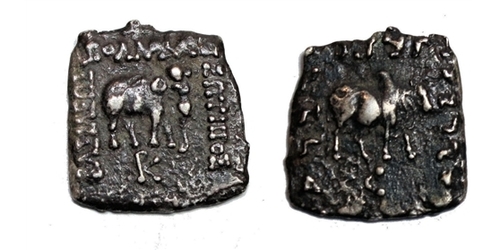 Full resolution: (500 X 279 px, file size: ~87K)
Bactrian Kingdom, Apollodotus I, 160-150 B.C. AR Indo-Greek bilingual AR drachm
$ 95.0
BAKTRIA, Greco-Baktrian Kingdom. Apollodotos I Soter. Circa 180-160 BC. AR Drachm (15mm, 1.57 gm). Elephant, wearing string of bells, standing right; monogram below / Zebu bull standing right. Bopearachchi 4F; SNG ANS 328-36; HGC 12, 119. VF, toned Apollodotus I Soter (means the "Saviour";) was an Indo-Greek king between 180 BCE and 160 BCE or between 174 and 165 BCE, who ruled the western and southern parts of the Indo-Greek kingdom, from Taxila in Punjab to the areas of Sindh and possibly Gujarat. earlier coins of king Apollodotus directly associate the elephant with Buddhist symbolism, such as the stupa hill (arched-hill symbol) surmounted by a crescent or a star (the Chaitya symbol). The zebu bull on the reverse if often shown with a nandipada taurine mark on its hump on the less worn coins, which reinforces the role of the animal as a symbol, religious or geographic, rather than just the depiction of an animal for decorative purposes. The nandipada and the zebu bull are generally associated with Nandi, Shiva 's humped bull in Hinduism. The same association was made later on coins of Zeionises or Vima Kadphises. The elephant, pendant to the bull, and shown with a girdle on the obverse , also must have a symbolic role, possibly Buddhism, as it was associated with the stupa hill in the earliest coins of Apollodotus.
Buy  [ https://www.palmyraheritagegallery.com/B ... ]