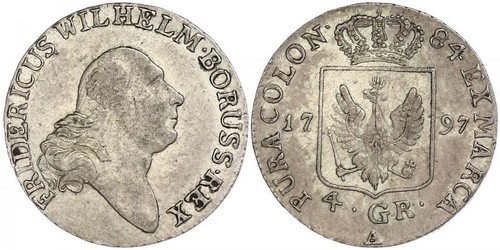 Frederick William II (German: Friedrich Wilhelm II; 25 September 1744 in Berlin –16 November 1797 in Potsdam) was the fourth King of Prussia, reigning from 1786 until his death. He was in personal union the Prince-Elector of Brandenburg and the sovereign prince of the Principality of Neuchâtel.

Frederick William was son of Prince Augustus William of Prussia (the second son of King Frederick William I of Prussia) and of Louise Amalie of Brunswick-Lüneburg. His mother’s elder sister, Elisabeth, was the wife of Augustus William’s brother King Frederick II (“Frederick the Great”). He was born in Berlin and became heir to the throne of Prussia on his uncle’s death in 1786, since Frederick II had no children. The boy was of an easy-going and pleasure-loving disposition, averse to sustained effort of any kind, and sensual by nature.

His marriage with Elisabeth Christine of Brunswick-Lüneburg, daughter of Charles I, Duke of Brunswick-Lüneburg, contracted 14 July 1765 in Charlottenburg, was dissolved in 1769. He then married Frederika Louisa of Hesse-Darmstadt, daughter of Ludwig IX, Landgrave of Hesse-Darmstadt on 14 July 1769 also in Charlottenburg. Although he had a numerous family by his second wife, he was completely under the influence of his mistress, Wilhelmine Enke, afterwards created Countess Wilhelmine von Lichtenau, a woman of strong intellect and much ambition and had many children by her.

Frederick William before the corpulence of his middle age was a man of singularly handsome presence, not without mental qualities of a high order; he was devoted to the arts—Beethoven and Mozart enjoyed his patronage, and his private orchestra had a Europe-wide reputation. But an artistic temperament was hardly that was required of a king of Prussia on the eve of the French Revolution; and Frederick the Great, who had employed him in various services—notably in an abortive confidential mission to the court of Russia in 1780—openly expressed his misgivings as to the character of the prince and his surroundings.

The misgivings appear justified by the event. Frederick William’s accession to the throne (17 August 1786) was, indeed, followed by a series of measures for lightening the burdens of the people, reforming the oppressive French system of tax-collecting introduced by Frederick, and encouraging trade by the diminution of customs dues and the making of roads and canals. This gave the new king much popularity with the masses; while the educated classes were pleased by his removal of Frederick’s ban on the German language, by the admission of German writers to the Prussian Academy, and by the active encouragement given to schools and universities.

But these reforms were vitiated in their source. In 1781 Frederick William, then prince of Prussia, inclined to mysticism, had joined the Rosicrucians, and had fallen under the influence of Johann Christof Wöllner (1732 – 1800), and by him the royal policy was inspired. Wöllner, whom Frederick the Great had described as a “treacherous and intriguing priest,” had started life as a poor tutor in the family of General von Itzenplitz, a noble of the Margraviate of Brandenburg, had, after the general’s death and to the scandal of king and nobility, married the general’s daughter, and with his mother-in-law’s assistance settled down on a small estate. By his practical experiments and by his writings he gained a considerable reputation as an economist; but his ambition was not content with this, and he sought to extend his influence by joining first the Freemasons and afterwards the Rosicrucians. Wöllner, with his impressive personality and easy if superficial eloquence, was just the man to lead a movement of this kind. Under his influence the order spread rapidly, and he soon found himself the supreme director (Oberhauptdirektor) of several circles, which included in their membership princes, officers and high officials. As a Rosicrucian Wöllner dabbled in alchemy and other mystic arts, but he also affected to be zealous for Christian orthodoxy, imperilled by Frederick II’s patronage of “Enlightenment”, and a few months before Frederick’s death wrote to his friend the Rosicrucian Johann Rudolph von Bischoffswerder (1741 – 1803) that his highest ambition was to be placed at the head of the religious department of the state as an unworthy instrument in the hand of Ormesus (the prince of Prussia’s Rosicrucian name) "for the purpose of saving millions of souls from perdition and bringing back the whole country to the faith of Jesus Christ."

Such was the man whom Frederick William II, immediately after his accession, called to his counsels. On 26 August 1786 Wöllner was appointed privy councillor for finance (Geheimer Oberfinanzrath), and on 2 October 1786 was ennobled. Though not in name, in fact he was prime minister; in all internal affairs it was he who decided; and the fiscal and economic reforms of the new reign were the application of his theories. Bischoffswerder, too, still a simple major, was called into the king’s counsels; by 1789 he was already an adjutant-general. These were the two men who enmeshed the king in a web of Rosicrucian mystery and intrigue, which hampered whatever healthy development of his policy might have been possible, and led ultimately to disaster. The opposition to Wöllner was, indeed, at the outset strong enough to prevent his being entrusted with the department of religion; but this too in time was overcome, and on 3 July 1788 he was appointed active privy councillor of state and of justice and head of the spiritual department for Lutheran and Catholic affairs.

War was at once declared on what later times would have called the “modernists”. The king, so long as Wöllner was content to condone his immorality (which Bischoffswerder, to do him justice, condemned), was eager to help the orthodox crusade. On 9 July 1788 was issued the famous religious edict, which forbade Evangelical ministers to teach anything not contained in the letter of their official books, proclaimed the necessity of protecting the Christian religion against the “enlighteners” (Aufklärer), and placed educational establishments under the supervision of the orthodox clergy. On 18 December 1788 a new censorship law was issued, to secure the orthodoxy of all published books; and finally, in 1791, a sort of Protestant Inquisition was established at Berlin (Immediate-Examinationscommission) to watch over all ecclesiastical and scholastic appointments.

In his zeal for orthodoxy, indeed, Frederick William outstripped his minister; he even blamed Wöllner’s “idleness and vanity” for the inevitable failure of the attempt to regulate opinion from above, and in 1794 deprived him of one of his secular offices in order that he might have more time “to devote himself to the things of God”; in edict after edict the king continued to the end of his reign to make regulations "in order to maintain in his states a true and active Christianity, as the path to genuine fear of God."

The effects of this policy of blind obscurantism far outweighed any good that resulted from the king’s well-meant efforts at economic and financial reform; and even this reform was but spasmodic and partial, and awoke ultimately more discontent than it allayed.

But far more fateful for Prussia was the king’s attitude towards the army and foreign policy. The army was the very foundation of the Prussian state, a truth which both Frederick William I and the great Frederick had fully realised; the army had been their first care, and its efficiency had been maintained by their constant personal supervision. Frederick William, who had no taste for military matters, put his authority as “Warlord” (Kriegsherr) into commission under a supreme college of war (Oberkriegs-Collegium) under the Duke of Brunswick and General Wichard Joachim Heinrich von Möllendorf. It was the beginning of the process that ended in 1806 at the Battle of Jena.

In the circumstances, Frederick William’s intervention in European affairs was not likely to prove of benefit to Prussia. The Dutch campaign of 1787, entered into for purely family reasons, was indeed successful; but Prussia received not even the cost of her intervention. An attempt to intervene in the war of Russia and Austria against the Ottoman Empire failed of its object; Prussia did not succeed in obtaining any concessions of territory from the alarms of the allies, and the dismissal of Hertzberg (5 July 1791) marked the final abandonment of the anti-Austrian tradition of Frederick the Great.

Meanwhile, the French Revolution had entered upon alarming phases, and in August 1791 Frederick William, at the meeting at Pillnitz, arranged with Emperor Leopold II to join in supporting the cause of King Louis XVI of France. But neither the king’s character, nor the confusion of the Prussian finances due to his extravagance, gave promise of any effective action. A formal alliance was indeed signed on 7 February 1792, and Frederick William took part personally in the campaigns of 1792 and 1793. He was hampered, however, by want of funds, and his counsels were distracted by the affairs of Poland, which promised a richer booty than was likely to be gained by the anti-revolutionary crusade into France. A subsidy treaty with the sea powers (19 April 1794) filled his coffers; but the insurrection in Poland that followed the partition of 1793, and the threat of the isolated intervention of Russia, hurried him into the separate Treaty of Basel with the French Republic (5 April 1795), which was regarded by the great monarchies as a betrayal, and left Prussia morally isolated in Europe on the eve of the titanic struggle between the monarchical principle and the new political creed of the Revolution.

Prussia had paid a heavy price for the territories acquired at the expense of Poland in 1793 and 1795, and when, on 16 November 1797, Frederick William died, he left the state in bankruptcy and confusion, the army decayed and the monarchy discredited; the king himself was known to the people as Der dicke Lüderjahn (“The obese ne'er-do-well”). He was succeeded by his son, Frederick William III. 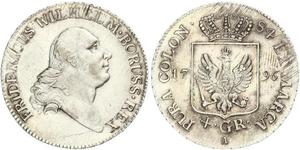 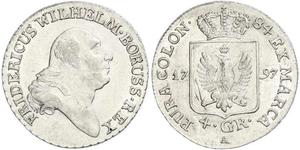 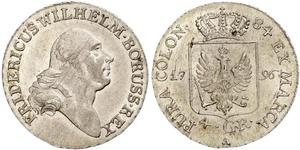 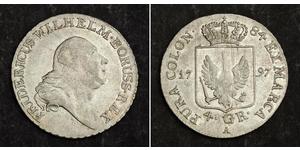 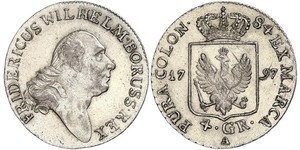 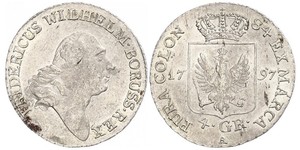 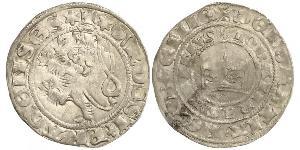 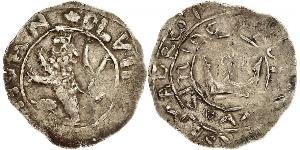 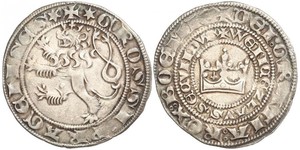 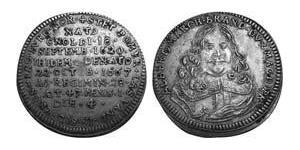