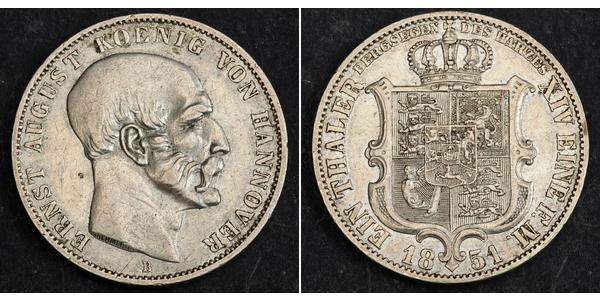 Queen Victoria was the granddaughter of George   III,  and was a descendant of most major European royal houses. She   arranged  marriages for her children and grandchildren across the   continent,  tying Europe together; this earned her the nickname "the   grandmother of  Europe." She was the last British monarch of the House   of Hanover; her  son King Edward VII belonged to the House of   Saxe-Coburg and Gotha since she could not inherit the German kingdom and   duchies under Salic law. Those possessions passed to the next eligible   male heir, her uncle Ernest Augustus I of Hanover, the Duke of   Cumberland and Teviotdale—the fifth son of George III. In the United   Kingdom, after World War I, King George V changed the house's name from   Saxe-Coburg and Gotha to the currently serving House of Windsor in 1917.   Both dynastic names are offshoots of the 800-plus years old House of   Wettin.

Ernest Augustus I (5 June 1771 – 18 November 1851) was king of Hanover from 1837, and from 1799 1st Duke of Cumberland and Teviotdale in the Peerage of Great Britain and 1st Earl of Armagh in the Peerage of Ireland. He was the fifth son and eighth child of King George III of the United Kingdom and Charlotte of Mecklenburg-Strelitz.

Ernest had a short military career, during which he received disfiguring wounds to the face. After the Napoleonic Wars ended, he married against the wishes of his mother, Queen Charlotte (his father was by then mad). After the death of Princess Charlotte of Wales in childbirth in 1817, there was some chance of Ernest, or at least his offspring, succeeding to the British throne, since he was the senior male who was both married and not estranged from his wife. However, both of his unmarried other brothers quickly married, and his next-older brother, Prince Edward, Duke of Kent and Strathearn, would father the eventual heir, Princess Victoria of Kent.

Ernest had an unpleasant reputation, due to his appearance, and due to his extreme Toryism and to persistent rumours (reputedly spread by his political foes) that he had murdered his valet and had fathered a son by his sister. In spite of these disabilities, he was constant in attendance in the House of Lords and was of considerable influence there.

Upon the death of his older brother William IV on 20 June 1837, he ascended the Hanoverian throne as senior male heir because Queen Victoria could not inherit under Salic Law that governed in the Germanic states dating back to the Holy Roman Empire. As Hanover's first monarch to reside in the Kingdom since George I, he had a generally successful fourteen-year reign, though he excited controversy when he dismissed the Gottingen Seven, professors who protested against his policies, from their positions.