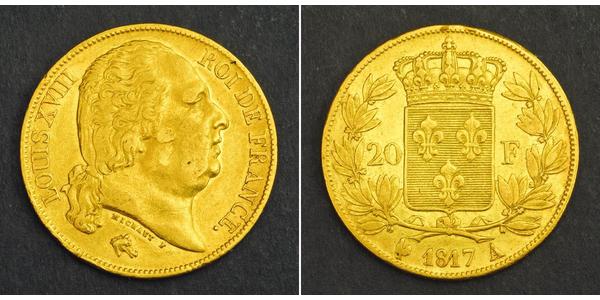 Louis Stanislas Xavier was born on 17 November 1755 in the Palace of Versailles in France, the fourth son of Louis, Dauphin of France, and his wife, Marie-Josèphe of Saxony. His paternal grandparents were King Louis XV of France and his consort, Queen Maria Leszczyńska. As the grandson of the king, he was a Petit-Fils de France. His maternal grandparents were King Augustus III of Poland, also the Elector of Saxony, and his wife, the Archduchess Maria Josepha, daughter of the Holy Roman Emperor Joseph I. At birth, he received the title of Count of Provence, but after the death of his two elder brothers and the accession of his remaining elder brother as Louis XVI of France in 1774, he became heir presumptive and was generally known as Monsieur, the traditional title of the eldest of the younger brothers of the King. The later birth of two sons to Louis XVI left him third in line to the throne of France.

During the events leading up to the French Revolution, Louis initially took a moderately liberal line opposing his brother[citation needed], but the increasing radicalism of the Revolution very soon alienated him. In 1789, he initiated a plan to save the King and end the French Revolution. In order to finance this venture, Louis (using one of his gentlemen, the Comte Claude-Louis de la Châtre[2], as an intermediary) commissioned the Marquis of Favras to negotiate a loan of two million francs from the bankers Schaumel and Sartorius[citation needed]. Unfortunately, Favras took into his confidence certain officers who betrayed him.

Simultaneously, a force of 30,000 soldiers was to encircle Paris. In the ensuing confusion, the city's three main liberal leaders (Jacques Necker, the popular Finance Minister of France, Jean Sylvain Bailly, the mayor of Paris, and the Marquis de La Fayette, the commander of the city's new National Guard), were to be assassinated.

In coordination with the king's unsuccessful flight to Varennes, Provence fled France in 1791. He was living in exile in Westphalia when King Louis XVI was guillotined in 1793. On the king's death, the comte de Provence declared himself regent for his nephew Louis XVII, although the boy was being held in custody by the revolutionary government and never actually reigned.

On the 10-year-old king's death in the Temple prison on 8 June 1795, Provence proclaimed himself King Louis XVIII, despite claims that Louis XVI had written papers shortly before his execution and given them to his lawyer, Malesherbes, accusing his brother of having betrayed the royal cause out of personal ambition and barring him from the succession to the throne.

In 1794, Provence had established a court-in-exile in the Italian town of Verona, which at the time was controlled by the Republic of Venice. There, he issued a declaration, written in part by the comte d'Antraigues, that he rejected all the changes that had been made in France since 1789, which effectively destroyed the position of moderate constitutional monarchists in France, who had hoped to restore the monarchy under a limited constitution which would codify most of the changes since the Revolution began. This prompted the famous remark that the exiled Bourbons had learned nothing and forgotten nothing. Due to complaints from the Directory, the Venetians expelled the pretender to the French throne from their territories in 1796.

Louis in fact corresponded with Napoleon during the Consulate, offering to renounce the declaration he had made in Verona, to pardon all regicides, to give titles and ennoblements to Bonaparte and his family, and even not to rescind any of the changes made since 1789. Napoleon's response was that the return of any Bourbon king to France would be accompanied by another civil war with at least another 100,000 dead bodies. With the army solidly behind him, Bonaparte likely could have restored the Bourbon monarchy while still being the power behind the throne; but he preferred to rule in name as well as substance. As he put it, "I will not play the role of Monck, nor will I let anyone else play it. Nor will I be a second Washington."

However, after the abdication of Napoleon I on 6 April 1814 (Treaty of Fontainebleau), Louis was finally able to secure the French throne, thanks to the support of the Allied Powers and, within France, of Napoleon's old foreign minister Charles Maurice de Talleyrand. He entered Paris on 3 May. Louis XVIII was forced by Talleyrand and the Napoleonic elites to grant a written constitution, the Charter of 1814, which would guarantee a bicameral legislature. The Charter, signed on 4 June, created a hereditary/appointive Chamber of Peers and an elected Chamber of Deputies, although the franchise was extremely limited. The new regime also allowed much greater freedom of expression than the Napoleonic regime which had preceded it.

Louis's (largely symbolic) efforts to reverse the results of the French Revolution quickly made him unpopular. When he first became the actual king of France after Napoleon's first abdication, his favorite, the staunchly royalist courtier Pierre Louis Jean Casimir de Blacas, was appointed to the position of minister in charge of the royal household (ministre de la Maison du Roi). Blacas quickly assumed a dominant role in the new king's Conseil du Roi, essentially becoming the first Prime Minister of France. But, unskilled, he made an assortment of errors, favoring members of the Ancien Régime too often. In addition, his cool and aloof behavior alienated many. Although he managed to suffice for the people of France while Napoleon was being exiled, he ruined all that he had done. He killed the economy even more, took away educational sources from the young people of France, and abolished many of Napoleon's reforms, including the "Civil/Napoleonic Code". This was a big blow to the people of France, and they longed for their ruler, realizing it was a large mistake to have sent him off.

On Napoleon's return from Elba in March 1815, which marked the beginning of the period known as the Hundred Days, Blacas accompanied Louis on his flight to Ghent. A funny anecdote consists of the fact that the people of Ghent called him "Louis die zwiet" - in French: dix-huit or the eighteenth, but in the local dialect "who sweats" ("zwiet", meaning "sweat"), because he was so very much afraid of Napoleon. After Napoleon's defeat at the Battle of Waterloo three months later, on 18 June 1815, and his second abdication on 22 June, Louis returned to France, entering Paris on 8 July. However, Blacas' unpopularity led to his dismissal. This did not, though, stop the atrocities of the White Terror, largely in the south, when supporters of the Bourbon monarchy murdered many who had supported Napoleon's return. Although the king and his ministers opposed the violence, they were ineffectual in taking active steps to stop it.

At the beginning of Louis's second restoration, his chief ministers were politically moderate, and included Talleyrand, the duc de Richelieu, and Élie Decazes. Louis himself followed a more cautious, moderate policy, hoping that moderation would ensure the continuation of the dynasty. Léon Gambetta later suggested Louis XVIII was "the greatest French king since Henri IV". The Chamber of Deputies elected in 1815, the notorious Chambre introuvable dominated by ultraroyalists (or Ultras), was dissolved by Richelieu for being impossible to work with, and electoral gerrymandering resulted in a more liberal chamber in 1816. However, the liberals ultimately proved just as unmanageable, and by 1820 Decazes and the King were looking to revise the electoral laws again to ensure a more conservative majority. However, the assassination, in February 1820, of the duc de Berry, the ultrareactionary son of Louis's equally ultrareactionary brother (and heir presumptive) the comte d'Artois, led to Decazes's fall from power and the Triumph of the Ultras. After an interval in which Richelieu returned to power from 1820 to 1821, a new Ultra ministry was formed, headed by the comte de Villèle, a leading Ultra. Soon, however, Villèle proved himself to be nearly as cautious as his master, and, so long as Louis lived, overtly reactionary policies were kept to a minimum.

He died on 16 September 1824, in the Tuileries Palace in Paris, after a painful agony of several days due to a case of gangrene of both feet. At his side were his brother, the comte d'Artois; his nephew, the duc d'Angoulême; his niece, the duchesse d'Angoulême, titled Madame (Louis XVI's and Marie-Antoinette's daughter); and the duchesse de Berry. Louis XVIII was interred in the Saint Denis Basilica.

Louis XVIII's brother, the comte d'Artois, succeeded him as Charles X. It was to be the only fully regular transfer of power in France from one head of state to another of the entire 19th century. (Charles X, Louis Philippe, and Napoleon III were ousted by revolution or military defeat, while the French Second Republic ended with a presidential coup d'état. No Third Republic President would serve out his whole term until Émile Loubet finished his term in 1906 and was succeeded by Armand Fallières.)