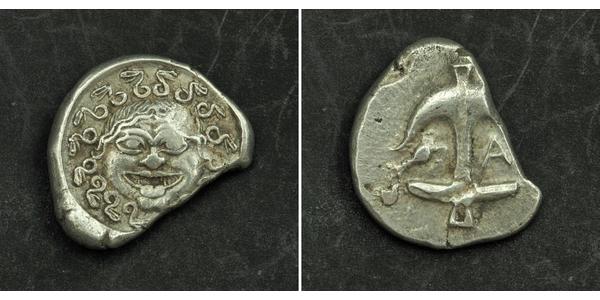 Reverse: Anchor with a crayfish in left field and privy letter (A) in right field.

In Ancient Greece, the Gorgoneion (Greek: G?????e???) was originally a horror-creating apotropaic pendant showing the Gorgon's head. It was associated with the deities Zeus and Athena; both are said to have worn it as a pendant.

Gorgoneia first appear in Greek art at the turn of the 8th century BC. One of the earliest representations is on an electrum stater discovered during excavations at Parium. Other early 8th-century examples were found at Tiryns. If we go further back into history, there is a similar image from the Knossos palace, datable to the 15th century BC. Marija Gimbutas even argues that "the Gorgon extends back to at least 6000 BC, as a ceramic mask from the Sesklo culture illustrates".

In the 6th century, gorgoneia of a canonical "lion mask type" were ubiquitous on Greek temples, especially in and around Corinth. Pedimental gorgoneia were common in Sicily; probably the earliest occurrence being in the Temple of Apollo in Syracuse. Around 500 BC, they ceased to be used for the decoration of monumental buildings, but were still shown on antefixes of smaller structures throughout the next century.

Apart from temples, the Gorgon imagery is present on dress, dishes, weapons, and coins found across the Mediterranean region from Etruria to the Black Sea coast. The Gorgon coins were struck in 37 cities, making her image on coins second in numismatic ubiquity only to several principal Olympian gods. On mosaic floors, the gorgoneion was usually depicted next to the threshold, as if guarding it from hostile intruders; on Attic kilns, the gorgoneion over the kiln door protected from mishaps. 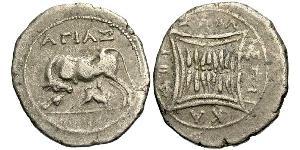 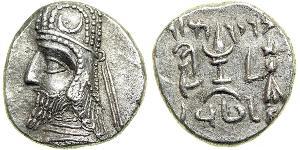 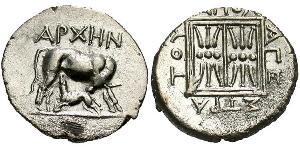