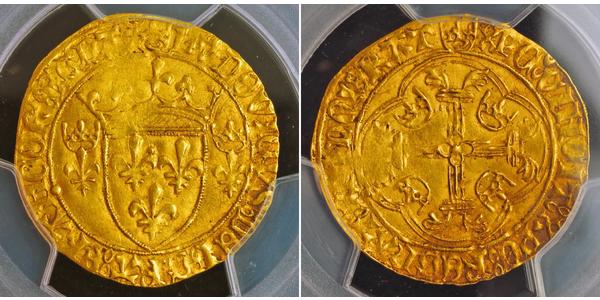 Reverse: Cross fleurée with crowns in angles, a quatrefoil in the   center; all within a quadrilobe. Legend: (crown) XPC °° VINCIT °° XPC °° RЄGnAT °° XPC °°   IMPЄRAT

A devious and disobedient Dauphin of France, Louis entered into open rebellion against his father in a short-lived revolt known as the Praguerie (1440). The king forgave his rebellious vassals, including his son Louis, to whom he entrusted the management of the Dauphiné.

Louis' ceaseless intrigues, however, led his father to banish him   from court. From the Dauphiné, he led his own political establishment   and married Charlotte of Savoy, daughter of Louis, Duke of Savoy, against the will of his father. Charles VII sent an army to compel his son to his will, but Louis fled to Burgundy, where he was hosted by Philip the Good, the Duke of Burgundy, Charles' greatest enemy.

When Charles VII died in 1461, Louis left the Burgundian court to   take possession of his kingdom. His taste for intrigue and his intense   diplomatic activity earned him the nicknames the Cunning (Middle French: le rusé) and the Universal Spider (Middle French: l'universelle aragne), as his enemies accused him of spinning webs of plots and conspiracies.

In 1472, the Duke of Burgundy, Charles the Bold, took up arms against his rival Louis, who was able to isolate the Duke from his English allies by signing the Treaty of Picquigny (1475) with Edward IV of England. The treaty formally ended the Hundred Years' War. With the death of Charles the Bold at the Battle of Nancy in 1477, the dynasty of the dukes of Burgundy died out. Louis took   advantage of the situation to seize numerous Burgundian territories,   including Burgundy proper and Picardy.

Without direct foreign threats, Louis was able to eliminate his   rebellious vassals, expand royal power, and strengthen the economic   development of his country. He died in 1483 and was succeeded by his son Charles VIII.