Reverse: Value (50 CENTS) above crowned coat-of-arms, suported by lion and unicorn, which are holding banners with flags of Britain and France. Initials K-G in fields. Legend: 50 CENTS / CANADA . 1939 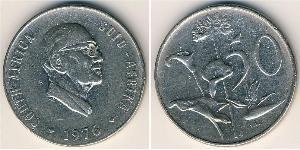