Liberty Head (Barber) designs appeared on United States minor silver coinage (the dime, quarter, and half dollar) from 1892 to 1916. They derive their common name from their designer, Chief Engraver Charles E. Barber.

In 1887, Mint Director James P. Kimball included a statement in his annual report to the United States Congress requesting a coinage redesign. He proposed a process whereby distinguished artists would be invited to participate in the design process, and, in 1890, the United States Department of the Treasury asked ten eminent American artists to submit design proposals for minor silver coinage. However, this plan proved unworkable when the artists made financial demands that the Treasury was unwilling to meet. The next effort was a contest open to the public, but none of the designs submitted in this manner were satisfactory to the Mint. Ultimately, it fell to Charles Barber to create new designs for silver coinage. He did so, and the designs were first placed into production in 1892. 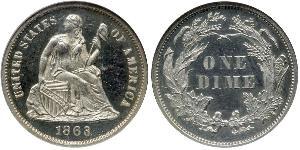