Full resolution: (1205 X 603pixels, file size: ~167K)
描述: 1853 C-1 R1 EF45. Tilted Partial Collar Strike. Sharpness near mint state but cleaned and nicely retoned frosty steel brown and light chocolate. There is a rim nick at star 3.5, another under the 3 in the date, and a tiny rim bruise at ED in UNITED. A knife edge was smoothed off the rim at the top of the obverse. Struck partially out of the collar creating the knife edge at the top of the obverse (previously mentioned as removed post-striking) and leaving a railroad rim from star 13 clockwise to star 1. Breen calls this type of error a "tilted partial collar strike," which more accurately conveys what happened at the mint. In addition, the planchet is a millimeter oversize in diameter, which is a result of being struck partially outside the collar, thus allowing the metal to spread out more than normal while being squeezed between the dies. A neat, extremely rare type of mint error for a half cent. Weight 84.2 grains. MDS, Manley state 1.0. Davy #53.1.9. Estimated Value $200-UP. Ex Bowers & Merena 9/14/92:100. Categories:
更多
售价 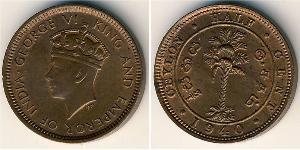