Full resolution: (1205 X 600pixels, file size: ~159K)
描述: 1856 Pattern Half Cent. Copper-nickel, plain edge. Judd-177. Pollock-205. Rarity 5. PCGS graded Proof 64 CAC Approved. Uniform soft reddish-brown. According to Judd: "During this year Congress was considering the bill which became the Act of February 21, 1857. This authorized cents weighing 72 grains to be struck from an alloy of 88% copper and 12% nickel. These were intended for the redemption of the large cents and the fractional parts of the Spanish and Mexican dollars, which had been passing freely throughout the country for a long time. "During this period the Melter and Refiner, Booth, had continued the experiments, trying to find a better alloy for the cent, under instructions from the Director of the Mint, J. R. Snowden. On July 11, 1856, Mr. Snowden reported to the Secretary of the Treasury, James Guthrie, that recent experiments had shown an alloy of 88% copper and 12% nickel to be far superior to bronze. "I have accordingly caused some specimens to be struck, fifty pieces of which I send you by Mr. Colmisnil, an agent of the Department. To prevent expense & delay we have used the half-cent dies. The specimens will show that the mixture receives a good impression from the dies, and exhibits its color and general appearance." Mr. Snowden then proposed that cents be authorized in this alloy with a standard weight of 72 grains, maximum deviation 3 grains. "Other half-cents were struck using an alloy of 90% copper and 10% nickel. Originally these had a gold-like color and weighed 69 grains. However, at this time it is very difficult to differentiate these from the first ones struck. Oxidation and cleaning have rendered color an unreliable guide and since there was a maximum deviation of 3 grains allowed for the 72 grain planchets, these pieces cannot be differentiated by weight either. Because they could only be differentiated by chemical analysis, no separate listing is given." Pop 14; 3 in 65 (PCGS # 11777) . Estimated Value $4,000 - 5,000. Categories: Patterns
更多
售价 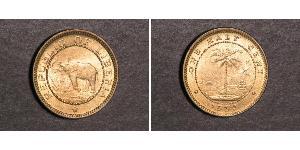