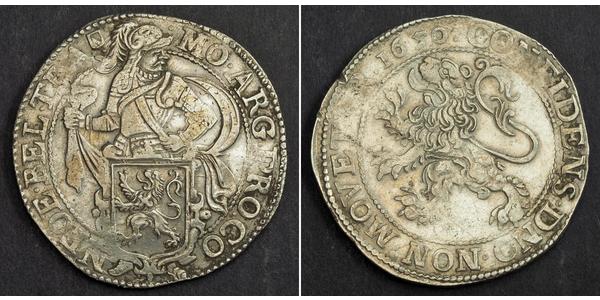 Dutch New Netherlands Colony (New York). The lion dollar also circulated throughout the English colonies during the Seventeenth and early Eighteenth centuries. Examples circulating in the colonies were usually fairly well worn so that the design was not fully distinguishable, thus they were sometimes referred to as "dog dollars."

The Republic of the Seven United Netherlands (or "of the Seven United Provinces") (Republiek der Zeven Verenigde Nederlanden/ProvinciÃƒÂ«n; also Dutch Republic or United Provinces in short, Foederatae Belgii Provinciae or Belgica Foederata in Latin) was a European republic between 1581 and 1795, in about the     same location as the modern Kingdom of the Netherlands, which is the     successor state.

Before 1581, the area of the Low Countries consisted     of a number of duchies, counties, and independent bishoprics, some but     not all of them part of the Holy Roman Empire. Today that area is     divided between the Netherlands, Belgium, Luxembourg and parts of France     and Germany. The Low Countries in the 16th century roughly   corresponded   to the Seventeen Provinces covered by the Pragmatic   Sanction of 1549 of   Holy Roman Emperor Charles V.

Through marriage, war or sale, these states were     acquired by the Habsburg emperor Charles V and his son, king Philip II     of Spain. In 1568, the Netherlands, led by William I of Orange,   revolted   against Philip II because of high taxes, persecution of   Protestants by   the government, and Philip's efforts to modernize and   centralize the   devolved medieval government structures of the   provinces. This was the   start of the Eighty Years' War.

In 1579, a number of the northern provinces of the     Netherlands signed the Union of Utrecht, in which they promised to     support each other in their defence against the Spanish army. This was     followed in 1581 by the Act of Abjuration, the declaration of     independence in which the provinces officially deposed Philip II.

The United Provinces first tried to choose their own lord, and they     asked the Duke of Anjou (sovereign from 1581-1583) to rule them.   Later,   after the assassination of William of Orange (July 10, 1584),     both Henry III of France and Elizabeth I of England declined the   offer   of sovereignty. However, the latter agreed to turn the United   Provinces   into a protectorate of England (Treaty of Nonsuch, 1585),   and sent the   Earl of Leicester as governor-general. This was not a   success, and in   1588 the provinces became a Republic.