Зображення у кращiй якостi: (1205 X 600пікселів, файл: ~144K)
Опис: 1874. Arrows. NGC graded Proof 66 Cameo. A blazing white Gem Cameo Proof! Only 700 Proofs struck. Originally preserved, the surfaces are intensely reflective with swirling frost on the devices. According to our observations, including the key highpoints of Liberty and the wreath, the strike is above-average, in fact sharp, in all areas. Pop 4; none finer. Historic account: We might mention that the inflation of the Civil War still had not worked its way out of the economy by the time this coin was struck. In fact, America experienced a sharp business setback in 1873-7, with many who lived through both saying it was far worse than the more famous contraction of 1929-39. Congress found it had once again to adjust the silver content of our coinage in order to retain the 16-to-1 ratio of silver to gold and to keep both metals at par (100%). One can see that mintage of Proofs remained low by today's numbers, while rising dramatically in the currency strikes. The changes made eased the return of small change to circulation during the Reconstruction period. Estimated Value $5,000 - 5,500. Categories: Dimes
читати далі
Ціна 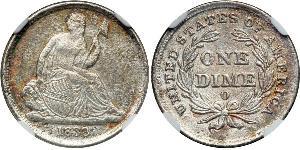