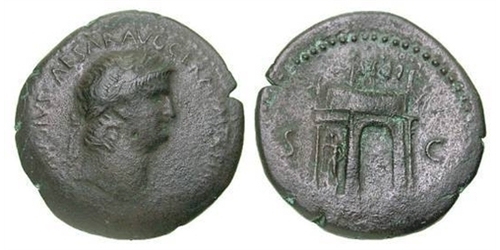 Full resolution: (500 X 254 px, file size: ~82K)
Nero. A.D. 54-68. AE Sestertius (23.80, 34.6 mm). Thracian mint, struck ca. A.D.
$ 850.0
Nero. A.D. 54-68. AE Sestertius (23.80gm, 34.6 mm). Thracian mint, struck ca. A.D. 64. NERO CLAVDIVS CAESAR AVG GER PM TR P IMP P P, Laureate head right, wearing aegis / SC, Triumphal arch surmounted by statue of emperor in quadriga accompanied by Pax and Victory, flanked by two soldiers; a nude, helmeted statue of Mars in side niche of arch. RPC 1758, RIC -. aVF, black patina with attractive blue highlights. Recent scholarship suggests that this rare issue of aes coinage with Latin legends was struck at Perinthus. The style is quite different from those struck in Rome or Lugdunum, Antioch, or Corinth. Nero:15 December 37 AD – 9 June 68 AD) was Roman Emperor from 54 to 68, and the last in the Julio-Claudian Dynasty. Nero was adopted by his great-uncle Claudius to become his heir and successor, and acceded to the throne in 54 following Claudius' death. Nero focused much of his attention on diplomacy, trade and enhancing the cultural life of the empire, ordering theaters built and promoting athletic games, but according to the historian Tacitus (writing one generation later) he was viewed by the Roman people as compulsive and corrupt. During his reign, the redoubtable general Corbulo conducted a successful war and negotiated peace with the Parthian Empire. His general Suetonius Paulinus crushed a revolt in Britain. Nero annexed the Bosporan Kingdom to the empire and may have begun the First Jewish–Roman War. In 64 AD, most of Rome was destroyed in the Great Fire of Rome. Suetonius, writing a generation later claims that many Romans believed Nero himself had started the fire, in order to clear land for his planned palatial complex, the Domus Aurea. In 68, the rebellion of Vindex in Gaul and later the acclamation of Galba in Hispania drove Nero from the throne. Facing a false report of being denounced as a public enemy who was to be executed, he committed suicide on 9 June 68 (the first Roman emperor to do so). His death ended the Julio-Claudian dynasty, sparking a brief period of civil wars known as the Year of the Four Emperors. Nero's rule is often associated with tyranny and extravagance. He is known for many executions, including that of his mother, and the probable murder by poison of his stepbrother Britannicus.
Buy  [ https://www.palmyraheritagegallery.com/N ... ]