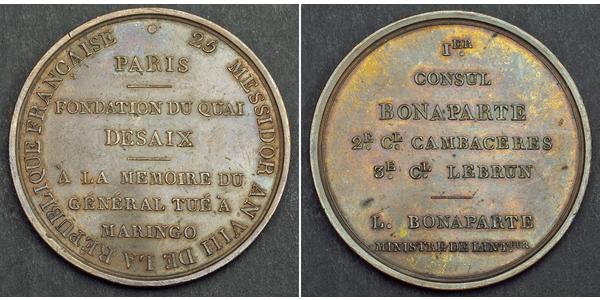 Obverse: Inscription "Paris / Foundation of the dock (wharf) Desaix in memory of the General killed at the battle of Marengo, 25th day of the Messidor (harvest) month (10th month of the calendar of the French Revolution, which started 19 or 20 June. and  ended on 18 or 19 July) in year 8th of the French Revolution". Legend: PARIS /--/ FONDATION DU QUAI / DESAIX /--/ À LA MEMOIRE DU / GÉNÉRAL TUÉ À / MARINGO/ 25 MESSIDOR AN VIII DE LA RÉPUBLIQUE FRANÇAISE.

Louis Charles Antoine Desaix  (17 August 1768 – 14 June 1800) was a French general and military leader during French Revolutionary Wars. According to the usage of the time, he took the name Louis Charles Antoine Desaix de Veygoux. Napoleon paid tribute to Desaix by erecting monuments to him, one on the Place Dauphine and the other in the Place des Victoires in Paris. The memorial in the Place des Victoires was later destroyed. A monumental tomb with sculptures by Jean Guillaume Moitte serves as his final resting-place at the Great St Bernard Hospice, (his body originally lay in Milan, and it was moved to the Hospice in 1805).[citation needed] Moreover, his name is written on a face of the Arc de Triomphe, with other great military figures of the French Revolution. There is also a fort, in Fort-de-France, Martinique, that is named Fort Desaix in his honor.[citation needed] A street, Rue Desaix, and a parallel cul-de-sac, Square Desaix, in the fifteenth arrondissement of Paris, between two metro stations, Bir-Hakeim and Dupleix, also bear his name. Desaix Boulevard is a major street in the Bayou St. John / Fairgrounds district of New Orleans. Several ships of the French Navy have borne the name Desaix in his honour.