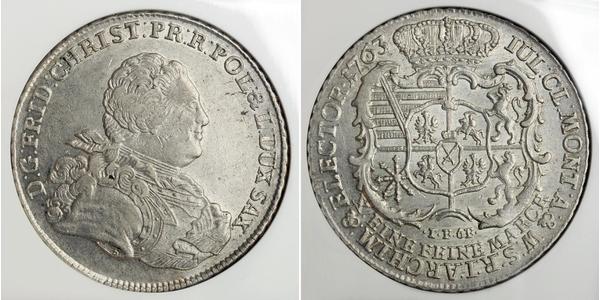 He was the third but eldest surviving son of Frederick Augustus II, Prince-Elector of Saxony and King of Poland, by his wife, Maria Josepha of Austria.

A weak child since his birth, he suffered some paralysis in one foot and was dependent on wheelchairs early in life. In a well-known portrait, which shows his Wettin and Wittelsbach relatives around him, he appears in his wheelchair. Today, this painting is shown in the Schloss Nymphenburg. His mother tried repeatedly to induce him to take monastic vows and renounce his succession rights in favour of his younger brothers.

The early deaths of his two older brothers, Frederick Augustus (1721), who was stillborn, and Joseph Augustus (1728), made him the heir to the throne. When his father died, on 5 October 1763, Frederick Christian succeeded him as Elector.

Even before then, however, Frederick Christian had written in his diary: "Princes exist for their subjects, not subjects for their princes. His subjects' wealth, public credit and a well-standing army make up the true happiness of a prince," thereby openly declaring himself open to the ideas of the Age of Enlightenment. He was also known for his considerable musical talent.

One of his first acts as Elector was the dismissal of the extremely unpopular prime minister, the Count Heinrich von Brühl, who had plunged Saxony into crisis, first with his failed economic policy, but particularly by his catastrophic foreign policy, which caused the Electorate to become involved in the Seven Years' War.

He began to reconstruct the wrecked finances of his country through his "Rétablissements": reforms of the policies of the electorate states. Through economic reconstruction, he gave new life to the devastated and plundered land which his predecessors had left him. Also introduced were measures to pare down the expenses of the court, and to simplify administration in accordance with principles of economy. Most members of his government, such as Thomas von Fritsch of Leipzig, Friedrich Ludwig Wurmb, and Christian Gotthelf Gutschmied had middle-class origins.

After a reign of only 74 days, Frederick Christian died of smallpox. He was buried in the Hofkirche of Dresden.

Because Frederick Christian's eldest son was a minor, his brother Franz Xavier and the Dowager Electress Maria Antonia took the joint regency of the Electorate until the boy's majority.