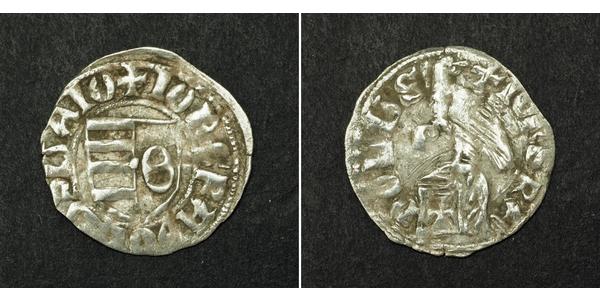 This coin was issued by Radu I (~1377 - 1383), brother of the famous Vlaicu I (1364 - ~1377) and father of the glorios Mircea the Old. This voivod (reigning prince) achieved for the first time for him and his descendants the title of Great Voivod (appearing on coins also). Yet short reigned, a large variety of silver coins comes from his period. Radu I was father of Dan I, who was Dracula´s (Vlad Tepes (aka) Vladimir the Impaler) great uncle (he was the father of Dracula´s Grandfather)!

The name "Wallachia" derives from the same Germanic base word as the Anglo-Saxon name for the Romano-Britons: "Wealas". Situated to the immediate south of the Carpathian Mountains, Wallachia is effectively "land of the foreigners." In this instance, the word arrived via the Goths who ventured down toward the Balkans. A local derivative, or evolution, of the word is the Slavic "Vlach".

The Wallachian rulers used the title Vojvod, which has the same meaning as the title duke.

One of the first written pieces of evidence of local voivodes is in connection with Litovoi (1272), who ruled over land each side of the Carpathians (including Fagaras in Transylvania), and refused to pay tribute to the Hungarian King Ladislaus IV. His successor was his brother Barbat (1285-1288). The continuing weakening of the Hungarian state by further Mongol invasions (1285-1319) and the fall of the Árpád dynasty opened the way for the unification of Wallachian polities, and to independence from Hungarian rule.

Wallachia's creation, held by local traditions to have been the work of one Radu Negru, is historically connected with Basarab I (1310-1352), who rebelled against Charles I of Hungary and took up rule on either side of the Olt River, establishing his residence in Câmpulung as the first ruler in the House of Basarab. Basarab refused to grant Hungary the lands of Fagaras, Amlas and the Banat of Severin, defeated Charles in the Battle of Posada (1330), and extended his lands to the east, to comprise lands as far as Kilia (in the Bujak, as the origin of Bessarabia); rule over the latter was not preserved by following princes, as Kilia fell to the Nogais ca.1334.

Basarab was succeeded by Nicolae Alexandru, followed by Vladislav I. Vladislav attacked Transylvania after Louis I occupied lands south of the Danube, conceded to recognize him as overlord in 1368, but rebelled again in the same year; his rule also witnessed the first confrontation between Wallachia and the Ottoman Turks (a battle in which Vladislav was allied with Ivan Shishman of Bulgaria). Under Radu I and his successor Dan I, the realms in Transylvania and Severin continued to be disputed with Hungary.