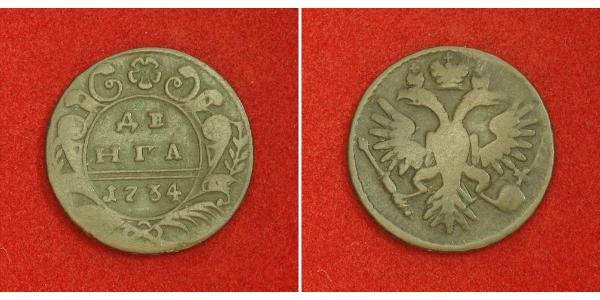 Obverse: Denomination in words ("Denga") above date (1734) within baroque frame.

Anna was the daughter of Ivan V of Russia, as well as the niece of Peter the Great. The latter married her to Frederick Wilhelm, Duke of Courland in November 1710, but on the return trip from Saint Petersburg in January 1711, her husband died. Anna continued ruling as Duchess of Courland (now western Latvia) from 1711 to 1730, with the Russian resident, Peter Bestuzhev, as her adviser. She never remarried after the death of her husband, but was reputed by her enemies to have indulged in a love affair with Ernst Johann von Biron for many years.

On the death of Peter II, Emperor of Russia, the Russian Supreme Privy Council under Prince Dmitri Galitzine made Anna Empress in 1730. They had hoped that she would feel indebted to the nobles for her unexpected fortune and remain a figurehead at best, and malleable at worst. In the hope of establishing a constitutional monarchy in Russia, they convinced her to sign articles that limited her power. However, these proved a minor inconvenience to her, and soon she established herself as an autocratic ruler, using her popularity with the imperial guards and lesser nobility.

As one of her first acts to consolidate this power she restored the security police, which she used to intimidate and terrorize those who opposed her and her policies. Although she did not move the capital back to Moscow, she spent most of her time at that city in the company of her foolish and ignorant maids. Finding delight in humiliating old nobility, she arranged the marriage of old Prince Galitzine, who had incurred her displeasure by marrying a Catholic, with one of her maids (after the death of his first wife), an elderly Kalmyk, dressed them as clowns, and had them spend their wedding night naked in a specially constructed ice palace during the exceptionally harsh winter of 1739â€“40.

Having a distrust of Russian nobles, Anna kept them from powerful positions, instead giving those to Baltic Germans. She raised to the throne of Courland one Ernst Johann von Biron, who gained her particular favour and had considerable influence over her policies. His archrival, the anti-German cabinet minister Artemy Petrovich Volynsky, was executed several months before Anna's death. Biron was sufficiently prudent not to meddle with foreign affairs or with the army, and these departments were in the able hands of two other foreigners, who thoroughly identified themselves with Russia, Andrey Osterman and Burkhardt Munnich.

They allied the country with Charles VI, (Holy Roman Emperor from 1711 to 1740), and committed Russia during the War of the Polish Succession (1733â€“1735). Afterwards, they made Augustus III the king of Poland at the expense of StanisÅ‚aw LeszczyÅ„ski and other candidates. In 1736 Anna declared war on the Ottoman Empire, but Charles made a separate peace with the Porte, forcing Russia to follow suit and to give up all recently captured territories with the exception of Azov. This war marks the beginning of that systematic struggle on the part of Russia to drive to the South which was brought to fruition by Catherine II. Anna's reign saw the beginnings of Russian territorial expansion into Central Asia.

Anna was famed for her big cheek, "which, as shown in her portraits", Carlyle says, "was comparable to a Westphalian ham". As her health declined she declared her grandnephew, Ivan VI, should succeed her. This was an attempt to secure the line of her father, Ivan V, and exclude descendants of Peter the Great from inheriting the throne.

Anna died at the age of 47 of kidney disease. Ivan VI was only a one-year-old baby at the time and his mother, Anna Leopoldovna, was detested for her German counselors and relations. As a consequence, shortly after Anna's death Elizabeth Petrovna, Peter I's legitimized daughter, managed to gain the favor of the populace, locked Ivan VI in a dungeon and exiled his mother. 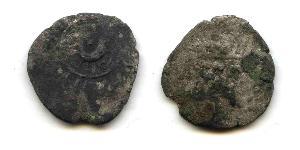