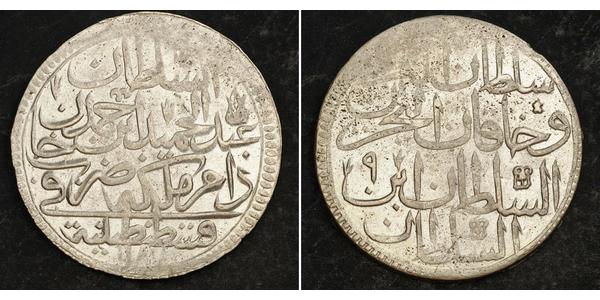 Obverse: Titles of the sultan above blessing phrase and mint name (Islambul) and accession date (1187).

Reverse: Four lines of legends. Regnal year (9) at the end of third line.

Abdülhamid was imprisoned for most of the first forty-three years of his life by his cousins Mahmud I and Osman III and his older brother Mustafa III, as was custom. He received his early education from his mother Rabia Semi Sultana, from whom he studied history and learned calligraphy.

His imprisonment made him aloof in regard to state affairs and malleable to the designs of his advisors. Yet he was also very religious and a pacifist by nature. At his accession the financial straits of the treasury were such that the usual donative could not be given to the janissaries. War was, however, forced on him and less than a year after his accession the complete defeat of the Turks at Battle of Kozluja led to the humiliating treaty of Kuchuk-Kainarji on July 21, 1774.

In spite of his failures, Abdülhamid was regarded as the most gracious Sultan of the Ottomans. He administrated the fire brigade during the fire in 1782. In Istanbul, he won the admiration of his people as he was so religious that he was called a "Veli" (saint). He also traced a reform policy, followed the governmental administrations closely and worked with statesmen. When Abdülhamid came to the throne the army asked for gratuities and the sultan claimed that: "There are, no longer, gratuities in our treasury, all of our soldier sons should learn". He also began the restoration of the military system. He is credited with better education standards. He tried to renovate the Janissary corps and the naval forces. He established a new artillery troop. He made a census in the Janissary corps.

Slight successes against rebellious outbreaks in Syria and the Morea could not compensate for the loss of the Crimea which Russia greatly coveted. War was once more declared against Russia in 1787 and in the following year Russians were joined by Austria. The Swedes and Prussians joined the conflict on the side of the Ottomans, but provided no assistance. While the Ottomans held their own in the conflict -- and even "won" the Battle of Karánsebes without firing a single shot -- they ultimately lost with Ochakov falling in 1788 to the Russians (all of its inhabitants being massacred.)

Abdülhamid died four months later at the age of sixty-four in Istanbul. He was buried in Bahcekapi, a tomb he had built for himself. 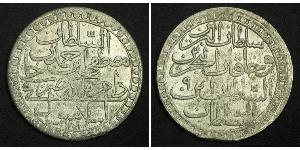