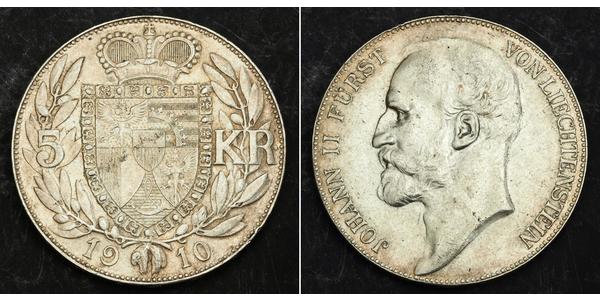 Reverse: Crowned shield of Liechtenstein, within Order of the Golden Fleece chain and olive-wreath. Legend: 5 - KR / 19 - 10

Johann II, Prince of Liechtenstein, born Johann Maria Franz   Placidus (Eisgrub, Moravia,   5 October 1840 Ã¢â‚¬â€œ Valtice, 11 February 1929), aka Johann II der   Gute or Johann II the Good, was the Prince of Liechtenstein between 1858 and 1929. His reign   of 70 years, 3 months is the second longest in European royal history   after that of Louis XIV of France.

Johann II was the son of Aloys II, Prince of   Liechtenstein and Countess Franziska   Kinsky. He ascended to the throne shortly after his 18th birthday,   and as such his reign is the longest precisely documented tenure of any   monarch since antiquity in which a regent was   never employed.

In 1862, Johann II issued Liechtenstein's first constitution. Later,   after Liechtenstein left the German confederation in 1866 and World   War I, Johann II granted a new constitution in 1921. It granted   considerable political rights to common Liechtensteiners, the latter   making the principality a constitutional monarchy. This   constitution survives today but with revisions, most notably in 2003.

Liechtenstein left the German Confederation in 1866. Not long after, the   army of Liechtenstein was abolished as it was regarded as an unnecessary   expense.

Johann II added much to the Liechtenstein Princely Collections.   Although considered a prominent patron of the arts and sciences during   his long reign, Johann II was also considered to be rather unsociable and did not   participate in social events. He never married or had any children, like   several other members of his family.

Between 1905 - 1920, Schloss Vaduz was renovated and expanded. Prince   Johann II did not live in the castle or even Liechtenstein, though his   successors would eventually move there in 1938. Schloss Vaduz would be their home.