Ver la imagen en su resolución original: (1205 X 600píxeles, tamaño de archivo: ~132K)
Descripción: 1876 $3 Gold. NGC graded Proof 65 Cameo. A magnificent brilliant untoned gem. Only 45 struck for this Proof-only year. An important American rarity. The Proof-only 1876 $3 gold piece is made famous by its low mintage and similarly low survival, with possibly as few as 25 to 30 believed extant. It is in the good company of several other extremely rare Proof dates in the $3 series including the Proofs of 1861, 1874, and 1878, but with the proviso that these other issues are not the desirable Proof-only years. Glowing luster with crisp definition and exceptionally clean surfaces. Strong cameo contrast on both sides. There is an identifying small tone spot in the reverse field above the 3 of the denomination that may be used when tracking this specimen. Definitely, a premium example of the grade. In fact, the defining Cameo Proof 65 $3 gold coin! Adding to those results, a further word about strike: this piece has needle-sharp devices, with gorgeous detail on the headband pears, the feathered headdress itself, all hair waves, and throughout the Wreath of Cereals made famous in American numismatics by the artist and mint engraver who created it, James B. Longacre. Among the most attractive Gem Cameo Proof 1876 three-dollar gold pieces that bidders will ever see presented for sale. Pop 5; 1 finer in 66 (PCGS # 88040) . Estimated Value $90,000 - 100,000. Categories:
más ...
Precio 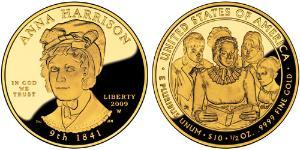