Obverse: Rosette above denomination and date. Sprays and mint letter (A) below.

Reverse: Crown of the Austrian empire on shield (double-headed eagle with shield at chest and imperial regalia in claws).
Legend: K.K. OESTERREICHISCHE SCHEIDEMUNZE . 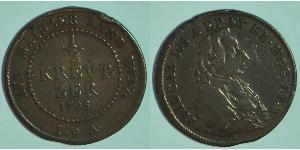