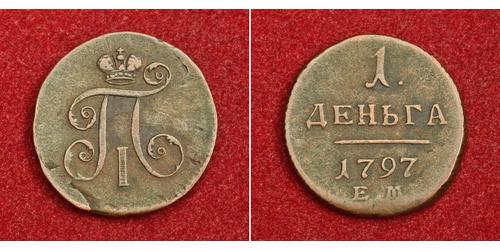 Obverse: Crown above monogram of Paul I of Russia.

Paul was born in the Palace of Empress Elisabeth in   St Petersburg. He was the son of Elizabeth's heir, her nephew, the Grand   Duke Peter, later Emperor Peter III, and his wife, the Grand Duchess   Catherine, later Empress Catherine II. In her memoirs, Catherine   strongly implies that Paul's father was not Peter, but one of her   lovers, Sergei Saltykov. Supporters of Catherine's claim assume that   Peter III was sterile, and was unable to even engage in normal sexual   relations with her until he had a surgical operation performed, and so   could not have sired the boy himself. Although the story was much aired   by Paul's enemies, it is fairly likely that this was simply an attempt   to cast doubt on Paul's right to the throne, in order to prop up   Catherine's own somewhat shaky claim. He physically resembled the Grand   Duke so one might doubt the claims of illegitimacy.

During his infancy, Paul was taken from the care of   his mother by the Empress Elizabeth, whose ill-judged fondness allegedly   injured his health. As a boy, he was reported to be intelligent and   good-looking. His pugnosed facial features in later life are attributed   to an attack of typhus, from which he suffered in 1771. It has been   asserted that his mother hated him, and was only restrained from putting   him to death while he was still a boy by the fear of what the   consequences of another palace crime might be to herself. Lord   Buckinghamshire, the British Ambassador at her court, expressed this   opinion as early as 1764. However, others suggest that the Empress, who   was usually very fond of children, treated Paul with kindness. He was   put in the charge of a trustworthy governor, Nikita Ivanovich Panin, and   of competent tutors.

Her dissolute court provided a bad home for a boy   destined to become the sovereign, but Catherine took great trouble to   arrange his first marriage with Wilhelmina Louisa (who acquired the   Russian name "Natalia Alexeievna"), one of the daughters of Ludwig IX,   Landgrave of Hesse-Darmstadt, in 1773, and allowed him to attend the   Council in order that he might be trained for his work as Emperor. His   tutor, Poroshin, complained of him that he was "always in a hurry,"   acting and speaking without reflection.

After his first wife died in childbirth, his mother   arranged another marriage on 7 October 1776, with the beautiful Sophia   Dorothea of WÃ¼rttemberg, given the new name Maria Feodorovna.   At this time he began to be involved in intrigues. He believed he was   the target of assassination. He also suspected his mother of intending   to kill him, and once openly accused her of causing broken glass to be   mingled with his food.

Yet, though his mother removed him from the council   and began to keep him at a distance, her actions can not be termed   unkind. The use made of his name by the rebel Pugachev, who had   impersonated his father Peter, tended no doubt to render Paul's position   more difficult. On the birth of his first child in 1777 the Empress   gave him an estate, Pavlovsk. Paul and his wife gained leave to travel   through western Europe in 1781-1782. In 1783 the Empress granted him   another estate at Gatchina, where he was allowed to maintain a brigade   of soldiers whom he drilled on the Prussian model, still an unpopular   stance at the time.

Paul became emperor after Catherine suffered a stroke   on 5 November 1796, and died in bed without having regained   consciousness. His first action was to inquire about and, if possible,   to destroy her testament, as it was rumoured that she had expressed   wishes to exclude Paul from succession and to leave the throne to   Alexander, her eldest grandson. These fears probably contributed to   Paul's promulgation of the Pauline Laws, which established the strict   principle of primogeniture in the House of Romanov and were not to be   modified by his successors.

The army, then poised to attack Persia in accordance   with Catherine's last design, was recalled to the capital within one   month of Paul's ascension. His father Peter was reburied with great pomp   at the royal sepulchre in the Peter and Paul Cathedral. To the rumour   of his illegitimacy Paul responded by parading his descent from Peter   the Great. The inscription on the monument to the first Emperor of   Russia erected in Paul's time near the St. Michael's Castle reads in   Russian "To the Great-Grandfather from the Great-Grandson", a   subtle but obvious allusion to the Latin "PETRO PRIMO CATHERINA   SECUNDA", the dedication by Catherine on the 'Bronze Horseman', the most   famous statue of Peter in St Petersburg.

Emperor Paul was idealistic and capable of great   generosity, but he was also mercurial and capable of vindictiveness.   Both qualities, it must be added, which the Russian people greatly   favoured as typical of benevolent autocrats of the time. During the   first year of his reign, Paul emphatically reversed many of the harsh   policies of his mother. Although he accused many of Jacobinism, he   allowed Catherine's best known critic, Radishchev, to return from   Siberian exile. Along with Radishchev, he liberated Novikov from the   fortress of Shlisselburg, and also Tadeusz KoÅ›ciuszko, yet both   liberated persons were kept in their own estates under police   supervision. He viewed the Russian nobility as decadent and corrupt, and   was determined to transform them into a disciplined, principled, loyal   caste resembling a medieval chivalric order. To those few who conformed   to his view of a modern-day knight (e.g., his favourites Kutusov,   Arakcheyev, Rostopchin) he granted more serfs during five years of his   reign than his mother had presented to her lovers during thirty-four   years of her own. Those who did not share his chivalric views were   dismissed or lost their places at court: seven field marshals and 333   generals fell into this category.

In accordance with his chivalric ideals, Paul was   elected as the Grand Master of the Knights Hospitaller, to whom he gave   shelter following their ejection from Malta by Napoleon. His leadership   resulted in the establishment of the Russian tradition of the Knights   Hospitaller (Order of St John/Maltese Order) within the Imperial Orders   of Russia. At a great expense, he built three castles in or around the   Russian capital. Much was made of his courtly love affair with Anna   Lopukhina, but the relationship seems to have been platonic and was   barely more than another detail in his ideal of chivalric manhood.

Emperor Paul also ordered the bones of Grigory Potyomkin, one of his mother's lovers, dug out of their grave and scattered.

Paul's independent conduct of the foreign affairs   plunged the country into the War of the Second Coalition against France   in 1798, when he sent Suvorov to batter Napoleon in Switzerland and   Ushakov to assist Nelson's operations in the Mediterranean. After great   hardships endured and great victories won in either campaign, the   emperor suddenly changed his mind and turned toward armed neutrality   against the United Kingdom of Great Britain and Ireland in 1801.

In both cases it seems as if he acted on personal   pique, quarrelling with France because he took a "sentimental" interest   in the Hospitallers, and then with Britain after it had captured Malta,   their traditional home. Besides the previously abandoned plans of a   joint Russo-French naval assault on the United Kingdom, another of his   famous follies was the dispatching of the Cossack expeditionary force to   fight the British in India (see Indian March of Paul).

Paul's premonitions of assassination were   well-founded. His attempts to force the nobility to adopt a code of   chivalry alienated many of his trusted advisors. The Emperor also   discovered outrageous machinations and corruption in the Russian   treasury. Although he repealed Catherine's law which allowed the   corporal punishment of the free classes and directed reforms which   resulted in greater rights for the peasantry, and better treatment for   serfs on agricultural estates, most of his policies were viewed as a   great annoyance to the noble class and induced his enemies to work out a   plan of action.

A conspiracy was organized, some months before it was   executed, by Counts Petr Alekseevich Pahlen, Nikita Petrovich Panin,   and the half-Spanish, half-Neapolitan adventurer Admiral Ribas. The   death of Ribas delayed the execution. On the night of the 23 March [O.S.   11 March] 1801, Paul was murdered in his bedroom in the newly built St   Michael's Castle by a band of dismissed officers headed by General   Bennigsen, a Hanoverian in the Russian service, and General Yashvil, a   Georgian. They charged into his bedroom, flushed with drink after   supping together, and found Paul hiding behind some drapes in the   corner. The conspirators pulled him out, forced him to the table, and   tried to compel him to sign his abdication. Paul offered some   resistance, and one of the assassins struck him with a sword, after   which he was strangled and trampled to death. He was succeeded by his   son, the 23-year-old Alexander I; who was actually in the palace, and to   whom General Nicholas Zubov, one of the assassins, announced his   accession, accompanied by the admonition, "Time to grow up! Go and   rule!".