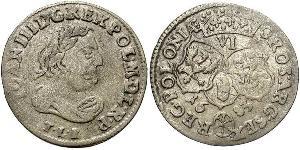 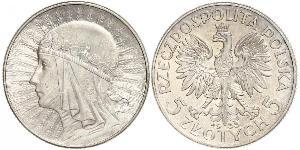 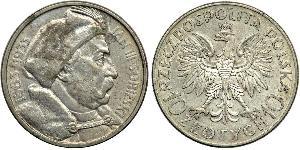 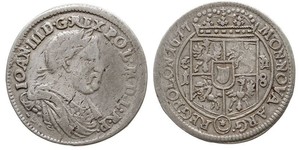 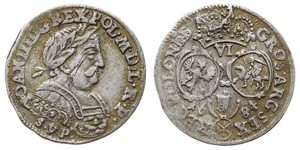 John III Sobieski (1629-1696)from the WikipediaRead original article
From Wikipedia, the free encyclopedia
Jump to: navigation, search
For other monarchs with similar names, see John of Poland (disambiguation).

John III Sobieski (Polish: Jan III Sobieski, Lithuanian: Jonas Sobieskis; 17 August 1629 – 17 June 1696), from 1674 until his death King of Poland and Grand Duke of Lithuania, was one of the most notable monarchs of the Polish–Lithuanian Commonwealth.

Sobieski's 22-year reign was marked by a period of the Commonwealth's stabilization, much needed after the turmoil of the Deluge and Khmelnytsky Uprising.[1] Popular among his subjects, he was an able military commander, most famous for the victory over the Turks in the 1683 Battle of Vienna.[2] Following his victories over the Ottoman Empire, the Ottomans named him the "Lion of Lechistan" and he was held as the saviour of European Christendom by the pope.[3] John Sobieski was born on 17 August 1629, in Olesko, a small town near Lwów in Galicia, now Ukraine, then part of the Ruthenian Voivodeship in the Crown of the Kingdom of Poland, Polish-Lithuanian Commonwealth to a notable noble family de Sobieszyn Sobieski of Janina coat of arms.[5][6] His father, Jakub Sobieski, was the Voivode of Ruthenia and Castellan of Kraków; his mother, Zofia Teofillia Daniłowicz was a granddaughter of Hetman Stanisław Żółkiewski.[6] John Sobieski spent his childhood in Żółkiew.[6] After graduating from the Nowodworski College in Kraków in 1643, young John Sobieski then graduated from the philosophical faculty of the Jagiellonian University in 1646.[6][7] After finishing his studies, together with his brother Marek Sobieski, John left for western Europe, where he spent more than two years travelling.[6][8] They visited Leipzig, Antwerp, Paris, London, Leiden and the Hague.[6] During that time, he met influential contemporary figures such as Louis II de Bourbon, Charles II of England and William II, Prince of Orange, and learned French, German and Italian, in addition to Latin.[9]

Both brothers returned to the Commonwealth in 1648. Upon receiving the news of the death of king Władysław IV Vasa and the hostilities of the Khmelnytsky Uprising, they volunteered for the army.[6][10] They both fought in the siege of Zamość.[6] They founded and commanded their own banners (chorągiew) of cavalry (one light, "cossack", and one heavy, of Polish hussars).[6] Soon, the fortunes of war separated the brothers. In 1649, Jakub fought in the Battle of Zboriv.[6] In 1652, Marek died in Tatar captivity after his capture at the Battle of Batoh.[6][11] John was promoted to the rank of pułkownik and fought with distinction in the Battle of Berestechko.[12] A promising commander, John was sent by King John II Casimir to Istanbul in the Ottoman Empire as one of the envoys in a diplomatic mission of Mikołaj Bieganowski.[6][13] There, Sobieski learned the Tatar language and the Turkish language and studied Turkish military traditions and tactics.[6][13] It is likely he participated as part of the briefly allied Polish-Tatar forces in the 1655 Battle of Okhmativ.[6]

After the start of the Swedish invasion of Poland known as "The Deluge", John Sobieski was among the Greater Polish regiments led by Krzysztof Opaliński, Palatine of Poznań which capitulated at Ujście, and swore allegiance to King Charles X Gustav of Sweden.[6][13] However, around late March 1656, he abandoned their side, returning to the side of Polish king John II Casimir Vasa, enlisting under the command of hetmans Stefan Czarniecki and Jerzy Sebastian Lubomirski.[6]

John III Sobieski, the victor of the Battle of Chocim.

During the three-day-long battle of Warsaw of 1656, Sobieski's command of a 2,000-man strong regiment of Tatar cavalry earned him promotion to the title of Lord Standard-Bearer of the Crown.[14] A strong supporter of the French faction, Sobieski remained loyal to the King during the infamous Lubomirski Rebellion, which further helped his military career. In 1665, he married Marie Casimire Louise de la Grange d'Arquien and was promoted to the rank of Grand Marshal of the Crown and, the following year, to the rank of Field Hetman of the Crown.[5]

In 1667, he achieved another great victory over the Cossacks and their Crimean Tatar allies in the Battle of Podhajce during the Polish–Cossack–Tatar War (1666–71).[13] On 5 February 1668, by now a famed and esteemed commander, he achieved the rank of Grand Hetman of the Crown, the highest military rank in the Polish–Lithuanian Commonwealth, and thereby the de facto commander-in-chief of the entire Polish Army.[13]

On 11 November 1673, during the Polish–Ottoman War (1672–76), Sobieski added yet another major victory to his list, this time defeating the Ottomans in the Battle of Chocim and capturing the fortress located there.[13] The news of the battle coincided with the news of the death of Michael I, King of Poland, who had died the day before the battle.[13] This made Sobieski one of the leading figures of the state, so on 19 May the following year, he was elected monarch of the Commonwealth.[5] His candidacy was almost universally supported, with only a dozen or so members of the diet opposing him. Among the most notable backers of his candidacy was his wife. John Sobieski was crowned John III on 2 February 1676.[5] Relief of Vienna by Bacciarelli

Though Poland-Lithuania was at that time the largest and one of the most populous states of Europe, Sobieski became a king of a country devastated by almost half a century of constant war. The treasury was almost empty and the court had little to offer the powerful magnates, who often allied themselves with foreign courts rather than the state. Sobieski stabilised the situation by forcing the Ottomans to accept a peace treaty to end the constant wars on the southern border. In the autumn of 1674, he recommenced the war against the Ottomans and managed to recapture the fortresses of Kamieniec Podolski, Bar and Reszków, which re-established a strongly fortified line defending Poland's southern border in the Ukraine.[15] Polish historian Oskar Halecki and others noted that Sobieski also planned to conquer Prussia with Swedish troops and French support.[16] This secret pact, later exposed, failed because the war with the Ottoman Empire lasted too long, during which time the Great Elector made treaties with France, the Swedes were repelled, and opposition by the Commonwealth's magnates, many of them on the Great Elector's side, increased. Sobieski's plan was also hurt by Michał Pac, the hetman of Lithuania and a supporter of Brandenburg, who simply defected with his army and then disbanded it.

In 1676, the Tatars began a counter-offensive and crossed the Dneper, but could not retake the strategic town of Żórawno, and the peace treaty was signed soon afterwards. Although Kamieniec Podolski remained a part of the Ottoman Empire, Poland counteracted its significance with the construction of the Stronghold of the Holy Trinity and return of the town of Bila Tserkva. The signing of the treaty began a period of peace that was much needed for the repair the country and strengthening of the royal authority. Although constantly hampered by the magnates and foreign courts of Brandenburg and Austria (Austria even tried to oust Sobieski and replace him with Charles of Lorraine), Sobieski managed to completely reform the Polish army.[16] The military was reorganised into regiments, the infantry finally dropped pikes, replacing them with battle-axes, and the Polish cavalry adopted hussars and dragoons formations.[17] Sobieski also greatly increased the number of guns and introduced new artillery tactics.[17]

As a diplomat, Sobieski envisioned an alliance with France and the Ottomans against the Austrian Empire and Brandenburg.[16] However, his plans never eventuated and, in 1683, had to be completely abandoned. Conscious that Poland lacked allies and risked war against most of its neighbours (similar to the Deluge), Sobieski allied himself with Leopold I, of the Holy Roman Empire. The alliance, although aimed directly against the Ottomans and indirectly against France, had the advantage of gaining support for the defence of Poland's southern borders.

In the spring of 1683, royal spies uncovered Turkish preparations for a military campaign. Sobieski feared that the target might be the Polish cities of Lwów and Kraków.[13] To counteract the threat, Sobieski began the fortification of the cities and ordered universal military conscription.[13]

Sobieski's military skill, demonstrated in war against the Ottoman Empire, contributed to his prowess as King of Poland. One of his ambitions was to unify Christian Europe in a crusade to drive the Turks out of Europe. He joined the alliance of the Holy Roman Emperor and joined the Holy League initiated by Pope Innocent XI to preserve Christendom. The alliance was unusual in that a number of Protestants, from Germany and even the son of Prince Rupert of the Stuarts fought.

Sobieski sending message of victory to the Pope after the Battle of Vienna, by Jan Matejko, 1880, National Museum, Kraków

Sobieski's greatest success came in 1683, with his victory at the Battle of Vienna, in joint command of Polish, Austrian and German troops, against the invading Ottoman Turks under Kara Mustafa.

Upon reaching Vienna, Sobieski had planned to attack on 13 September, but with the Ottoman army close to breaching the walls, he ordered a full attack on 12 September. At 4 am, the united army of about 81,000 men attacked a Turkish force of about 130,000 men. At about 5 pm, after observing the infantry battle from the hilltop, Sobieski led the Polish husaria cavalry along with Austrians and Germans in a massive charge down the hillside. Soon, the Ottoman battle line was broken and the Ottoman forces scattered in disarray. At 5:30 pm, Sobieski entered the deserted tent of Kara Mustafa and the Battle of Vienna ended.

The Pope and other foreign dignitaries hailed Sobieski as the "Savior of Vienna and Western European civilization."[18] In a letter to his wife, he wrote, "All the common people kissed my hands, my feet, my clothes; others only touched me, saying: 'Ah, let us kiss so valiant a hand!'"[19] Sobieski and his sons

Although the King spent much time on the battlefields, which could suggest a good state of health, towards the end of his life he became seriously and increasingly ill. Notably Sobieski suffered from obesity, gout, kidney stones, hypertension and inflammation of the sinuses, and syphilis which he acquired in France. Additionally, the highly unsuccessful and dangerous use of mercury as a treatment for syphilis led to the adverse effects of nephrotoxicity.

King John III Sobieski died in Wilanów, Poland on 17 June 1696 from a sudden heart attack which was most probably caused by the overall weakening of the body by previous illnesses. His wife, Marie Casimire Louise, died in 1716 in Blois, France, and her body was returned to Poland. They are interred together in Wawel Cathedral, Kraków, Poland.

He was succeeded by Augustus II who stayed in power primarily because of Saxon and Russian support. On his death in 1733, a struggle for the crown of Poland ensued and caused the War of the Polish Succession.