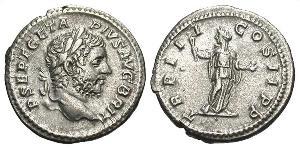 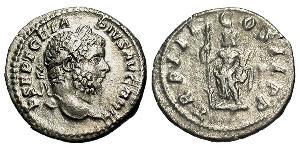 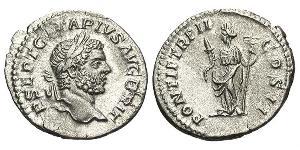 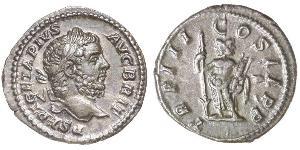 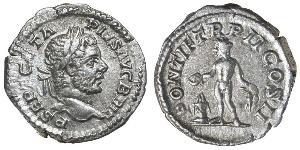 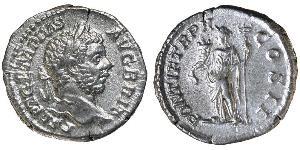 Geta (189-211)from the WikipediaRead original article
From Wikipedia, the free encyclopedia
Jump to: navigation, search
For other people of the same name, see Publius Septimius Geta (disambiguation).

Geta (Latin: Publius Septimius Geta Augustus;[1] 7 March 189 – 19 December 211), was a Roman emperor who ruled with his father Septimius Severus and his older brother Caracalla from 209 until his death, when he was murdered on Caracalla's orders.

Geta was the younger son of Septimius Severus by his second wife Julia Domna. Geta was born in Rome, at a time when his father was only a provincial governor at the service of Emperor Commodus.

Conflicts between Geta and Caracalla were constant and often required the mediation of their mother. To appease his younger son, Septimius Severus gave Geta the title of Augustus in 209.

During the campaign against the Britons in the early 3rd century CE, imperial propaganda promoted the image of a happy family that shared the responsibilities of rule. Septimius Severus entrusted Julia Domna with the role of counsellor, Caracalla acted as the emperor's second in command, and administrative and bureaucratic duties were Geta's responsibility. In reality, however, the rivalry and antipathy between the brothers did not abate.

When Septimius Severus died in Eboracum in early 211, Caracalla and Geta were proclaimed joint emperors and returned to Rome.

Their joint rule was a failure. Later sources speculated that the brothers wished to split the empire in two halves. By the end of 211, the situation had become unbearable. Caracalla tried unsuccessfully to murder Geta during the festival of Saturnalia. Finally, in December Caracalla had his mother arrange a peace meeting with his brother in his mother's apartments, and then had him murdered in her arms by centurions.

Following Geta's assassination, Caracalla ordered his brother's name to be removed from all inscriptions. The now sole emperor also took the opportunity to get rid of his political enemies, on grounds of conspiracy. Cassius Dio stated that around 20 000 men and women were killed or proscribed during this time.[2]

Very few marble portraits attributable to Geta survive to date, presumably due to the very thorough damnatio memoriae which resulted in the erasing of his images. However, Roman coins with his image are plentiful, and can reflect how his father Septimius Severus and later Geta himself wanted him to be seen by the Roman people (and especially the Roman military).

Images of Geta and his older brother Caracalla cannot be well distinguished until the death of the father. Both sons were supposed to be presented as equally suitable heirs to the throne, showing thus more "depth" to the dynasty.

On his coins Caracalla, who became Augustus in 197, was shown with a wreath of laurels, while Geta remained bareheaded until he himself became Augustus in 209.[3] Between 209 and their father's death in February 211, both brothers were shown as equally mature young men with a short full beard, ready to take over the empire. Between the death of Septimus Severus and the assassination of Geta, Caracalla's portraits did not change, while Geta was depicted with a long beard with hanging hairs much like his father, a strong indication of Geta's efforts to be seen as the "true" successor of his father.[4]