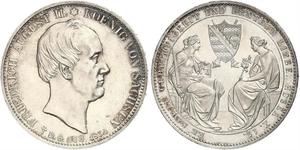 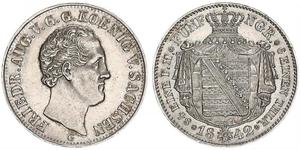 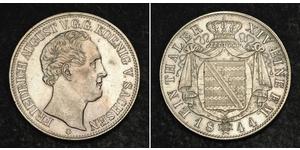 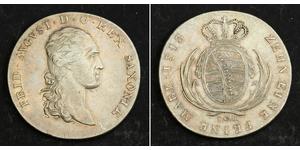 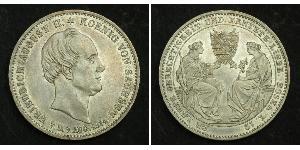 He was an officer in the War of the Sixth Coalition. However, he had little interest in military affairs.

Co-Regent to the Kingdom[edit]

The July Revolution of 1830 in France marked the beginning of disturbances in Saxony that autumn. The people claimed a change in the constitution and demanded a young regent of the kingdom to share the government with the King Anton. On 1 September the Prince Maximilian renounced his rights of succession in favor of his son Frederick Augustus, who was proclaimed Prince Co-Regent (de: Prinz-Mitregenten) of Saxony. On 2 February 1832 Frederick Augustus brought Free Autonomy to the cities. Also, by an edict of 17 March of that year, the farmers were freed from the corvée and hereditary submission.

On 6 June 1836, King Anton died and Frederick Augustus succeeded him. As an intelligent man, he was quickly popular with the people as he had been since the time of his regency. The new king solved political questions only from a pure sense of duty. Mostly he preferred to leave these things on the hands of his ministers.

A standardized jurisdiction for Saxony created the Criminal Code of 1836. During the Revolutionary disturbances of 1848 (March Revolution), he appointed liberal ministers in the government, lifted censorship, and remitted a liberal electoral law. Later his attitude changed. On 28 April Frederick August II dissolved the Parliament. In 1849, Frederick Augustus was forced to flee to the Königstein Fortress. The May Uprising was crushed by Saxon and Prussian troops and Frederick was able to return after only a few days.

Journey through England and Scotland[edit]

In 1844 Frederick Augustus, accompanied by his personal physician Carl Gustav Carus, made an informal (incognito) visit to England and Scotland. Among places they visited were Lyme Regis where he purchased from the local fossil collector and dealer, Mary Anning, an ichthyosaur skeleton for his own extensive natural history collection. It was not a state visit, but the King was the guest of Queen Victoria and Prince Albert at Windsor Castle, visited many of the sights in London and in the university cities of Oxford and Cambridge, and toured widely in England, Wales and Scotland.[1]

During a journey in Tyrol, he had an accident in Brennbüchel in which he fell in front of a horse that stepped on his head. On 8 August 1854, he died in the Gasthof Neuner. He was buried on 16 August in the Katholische Hofkirche of Dresden. In his memory, the Dowager Queen Maria arranged to establish the Königskapelle (King's Chapel) at the accident place, which was consecrated one year later, some of the last members of the Saxon royal family, including Maria Emanuel, Margrave of Meissen, are buried beside the chapel

In Dresden on 24 April 1833 Frederick Augustus married secondly with the Princess Maria Anna of Bavaria (Maria Anna Leopoldine Elisabeth Wilhelmine), daughter of the King Maximilian I Joseph of Bavaria. Like his first marriage, this was childless.

The musician Theodor Uhlig (1822–1853) was an illegitimate son of Frederick Augustus.[2]

Without legitimate issue, after his death Frederick Augustus was succeeded by his younger brother, Johann.