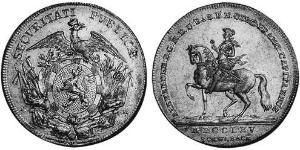 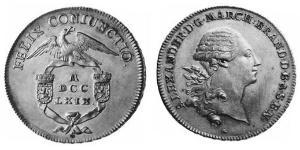 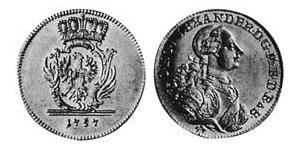 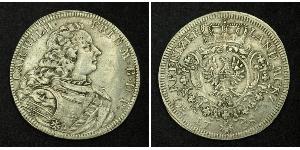 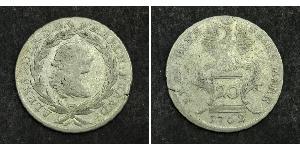 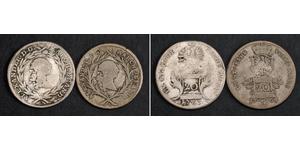 Christian Frederick Charles Alexander (German: Christian Friedrich Karl Alexander) (24 February 1736 in Ansbach – 5 January 1806 in Benham Castle near Speen) was the last Margrave[1] of the two Franconian principalities Brandenburg-Ansbach and Brandenburg-Bayreuth, which he sold to the King of Prussia, a fellow member of the House of Hohenzollern.

His parents were Charles William Frederick, Margrave of Brandenburg-Ansbach and Friederike Luise of Prussia, the daughter of King Frederick William I of Prussia and sister of Frederick II of Prussia.

After the sudden death of his elder brother Charles Frederick August on 9 May 1737, "Alexander," as he later called himself, became Crown Prince of the principality. From 1748 to 1759, he studied in Utrecht. As the young "Count of Sayn" (the county of Sayn-Altenkirchen in the Westerwald having been absorbed into the Principality of Ansbach in 1741) he travelled to Turin and Savoy.[2]

On 3 August 1757, Charles Alexander became the Margrave of Brandenburg-Ansbach. The Residenz of the principality was Ansbach, but Charles Alexander preferred his hunting estate and country seat in Triesdorf. Here, he renovated the "White Castle" for his mistress Hippolyte Clairon, the "Red Castle" for himself, and built the Villa Sandrina for another mistress, "Fräulein Kurz", and the "Round Villa" (Villa Rotunda) for his mistress (and later wife) Elizabeth Craven.

In 1758, Charles Alexander founded the porcelain factory in Ansbach and made ventures into agriculture by importing sheep. In 1769, he acquired the principality of Bayreuth pursuant to the Haus- und Reichsgesetze laws of the House of Hohenzollern.

In 1780, Charles Alexander founded his own bank, the Hochfürstlich-Brandenburg-Anspach-Bayreuthische Hofbanco, out of which later came the Bayerische Hypotheken- und Wechselbank ("Bavarian Mortgage and Change Bank", today absorbed into the HypoVereinsbank). He evidently wanted to avoid supporting the Jewish banking houses that were then overseeing his financial affairs, and to keep as much of his revenue as possible in his own hands by setting himself up as a private banker.

One of Charles Alexander's enterprises earned income from hiring auxiliary troops to George III of Great Britain for the Colonies in America. He had nominal command over the "Frankish Army" of 1,644 mercenaries, of whom apparently only 1,183 returned to their homeland in 1783. The Margrave rented further troops to Holland. With these incomes, he paid down the principality's debts, which amounted to 5,000,000 guilders at the time he took office (1757). By the time of his abdication 34 years later, the principality's debt stood at only 1,500,000 guilders.

Charles Alexander's first wife Frederica Caroline died on 18 February 1791 in Unterschwaningen, where she had lived since separating from her husband. On 19 May of the same year, Charles Alexander left Triesdorf for England.

The end of the Margraviate[edit]

On 16 January 1791, Charles Alexander sold his Margravate to Prussia. The contract was arranged by Charles August, Baron of Hardenberg, who had been Acting Minister in Ansbach since 1790. Under the terms of the contract, Prussia paid the Margrave as compensation an annual stipend of 300,000 guilders.

On 2 December, in Bordeaux, France, he signed his formal abdication as Margrave.

The Franconian region over which he had ruled changed hands many times. On 15 December 1805, in the first Treaty of Schönbrunn, Prussia ceded the Principality of Ansbach to France in exchange for the Electorate of Hanover; in 1806, Ansbach was acquired by the Kingdom of Bavaria in exchange for the Duchy of Berg, and soon afterwards, the Prussian defeat at Jena on 14 October 1806 resulted in the cession of the Principality of Bayreuth to the French in the Treaty of Tilsit in July 1807.[3] In 1810, Bayreuth was acquired by Bavaria. Finally, in 1871, Bavaria was incorporated into the North German Confederation to form a German Empire under Prussian control.

Charles Alexander sailed to England as a private citizen with his second wife, Elizabeth Craven and there the couple dedicated themselves to breeding horses. By December 1791, he had found a property near the River Thames at Hammersmith, and in 1798, he acquired the Benham Park estate at Speen near Newbury in Berkshire. On 5 January 1806, aged 69, Charles Alexander died after a short illness caused by lung disease. Today, a memorial in St Mary's Church in Speen, simply records "In Memory of the Margrave of Anspach, who died at Benham 5th January 1806". [1]