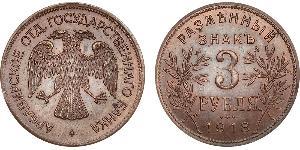 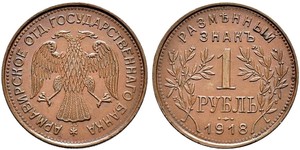 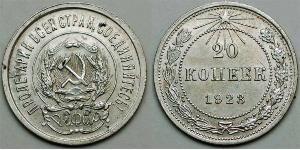 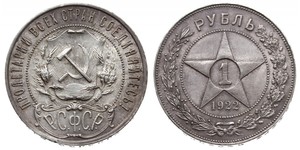 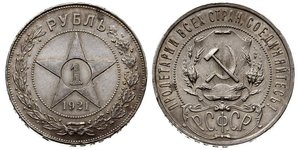 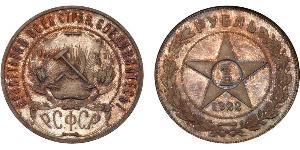 listen (help·info)) commonly referred to as Soviet Russia or simply as Russia,[4] was a sovereign state in 1917–22, the largest, most populous, and most economically developed republic of the Soviet Union in 1922–91 and a sovereign part of the Soviet Union with its own legislation in 1990–91.[5] The Republic comprised sixteen autonomous republics, five autonomous oblasts, ten autonomous okrugs, six krais, and forty oblasts.[5] Russians formed the largest ethnic group. To the west it bordered Finland, Norway and Poland; and to the south, China, Mongolia and North Korea whilst bordering the Arctic Ocean to the north, the Pacific Ocean to the east and the Black sea and Caspian Sea to the south. Within the USSR, it bordered the Baltic republics (Lithuania, Latvia and Estonia), the Byelorussian SSR and the Ukrainian SSR to the west. To the south it bordered the Georgian, Azerbaijan and Kazakh SSRs.

The RSFSR was established on November 7, 1917 (October Revolution) as a sovereign state. The first Constitution was adopted in 1918. In 1922 the Russian SFSR signed the Treaty on the Creation of the USSR.

The economy of Russia became heavily industrialized, accounting for about two-thirds of the electricity produced in the USSR. It was, by 1961, the third largest producer of petroleum due to new discoveries in the Volga-Urals region[6] and Siberia, trailing only the United States and Saudi Arabia.[7] In 1974, there were 475 institutes of higher education in the republic providing education in 47 languages to some 23,941,000 students. A network of territorially organized public-health services provided health care.[5] After 1985, the restructuring policies of the Gorbachev administration relatively liberalised the economy, which had become stagnant since the late 1970s, with the introduction of non-state owned enterprises such as cooperatives. The effects of market policies led to the failure of many enterprises and total instability by 1990.

On June 12, 1990, the Congress of People's Deputies adopted the Declaration of State Sovereignty. On June 12, 1991, Boris Yeltsin was elected the first President. On December 8, 1991, heads of Russia, Ukraine and Belarus signed the Belavezha Accords. The agreement declared dissolution of the USSR by its founder states (i.e. denunciation of 1922 Treaty on the Creation of the USSR) and established the CIS. On December 12, the agreement was ratified by the Russian Parliament, therefore Russian SFSR denounced the Treaty on the Creation of the USSR and de facto declared Russia's independence from the USSR.

On December 25, 1991, the Russian SFSR was renamed the Russian Federation.[8] On December 26, 1991, the USSR was self-dissolved by the Soviet of Nationalities, which by that time was the only functioning house of the Supreme Soviet (the other house, Soviet of the Union, had already lost the quorum after recall of its members by the union republics). After dissolution of the USSR, Russia declared that it assumed the rights and obligations of the dissolved central Soviet government, including UN membership.

The new Russian constitution, adopted on December 12, 1993 after a constitutional crisis, abolished the Soviet system of government in its entirety.

Under the leadership of Vladimir Lenin, the Bolsheviks established the Soviet state on 7 November [O.S. 25 October] 1917, immediately after the Russian Provisional Government, which governed the Russian Republic, was overthrown during the October Revolution. Initially, the state did not have an official name and wasn't recognized by neighboring countries for five months. Meanwhile, anti-Bolsheviks coined the mocking label "Sovdepia" for the nascent state of the "Soviets of Workers' and Peasants' Deputies".[9]

On January 25, 1918 the third meeting of the All-Russian Congress of Soviets renamed the unrecognized state the Soviet Russian Republic.[10] The Treaty of Brest-Litovsk was signed on March 3, 1918, giving away much of the land of the former Russian Empire to Germany in exchange for peace during the rest of World War I. On July 10, 1918, the Russian Constitution of 1918 renamed the country the Russian Socialist Federative Soviet Republic.[11] By 1918, during the Russian Civil War, several states within the former Russian Empire seceded, reducing the size of the country even more.

Internationally, in 1920, the RSFSR was recognized as an independent state only by Estonia, Finland, Latvia and Lithuania in the Treaty of Tartu and by the short-lived Irish Republic.[12]

On December 30, 1922, with the creation of the Soviet Union, Russia became one of sixteen republics within the federation of the Union of Soviet Socialist Republics. The final Soviet name for the republic, the Russian Soviet Federative Socialist Republic, was adopted in the Soviet Constitution of 1936. By that time, Soviet Russia had gained roughly the same borders of the old Tsardom of Russia before the Great Northern War of 1700.

For most of the Soviet Union's existence, it was commonly referred to as "Russia," even though technically "Russia" was only one republic within the larger union—albeit by far the largest, most powerful and most highly developed.

On December 25, 1991, following the collapse of the Soviet Union, the republic was renamed the Russian Federation, which it remains to this day.[13] This name and "Russia" were specified as the official state names in the April 21, 1992 amendment to the existing constitution and were retained as such in the 1993 Constitution of Russia.

Roughly 70% of the area in the RSFSR consisted of broad plains, with mountainous tundra regions mainly concentrated in the east. The area is rich in mineral resources, including petroleum, natural gas, and iron ore.[14]

The Soviet regime first came to power on November 7, 1917, immediately after the Russian Provisional Government, which governed the Russian Republic, was overthrown in the October Revolution. The state it governed, which did not have an official name, would be unrecognized by neighboring countries for another five months.

On January 25, 1918, at the third meeting of the All-Russian Congress of Soviets, the unrecognized state was renamed the Soviet Russian Republic.[10] On March 3, 1918, the Treaty of Brest-Litovsk was signed, giving away much of the land of the former Russian Empire to Germany, in exchange for peace in World War I. On July 10, 1918, the Russian Constitution of 1918 renamed the country the Russian Socialist Federative Soviet Republic.[11] By 1918, during the Russian Civil War, several states within the former Russian Empire had seceded, reducing the size of the country even more.

The RSFSR was recognized as an independent state internationally by only Estonia, Finland, Latvia, and Lithuania, in the Treaty of Tartu in 1920.

Paragraph 3 of Chapter 1 of the 1925 Constitution of the RSFSR states the following:[15]

Many regions in Russia were affected by the Soviet famine of 1932–1933: Volga; Central Black Soil Region; North Caucasus; the Urals; the Crimea; part of Western Siberia; and the Kazak ASSR. With the adoption of the 1936 Soviet Constitution on December 5, 1936, the size of the RSFSR was significantly reduced. The Kazakh ASSR and Kirghiz ASSR were transformed into the Kazakh and Kirghiz Soviet Socialist Republics. The Karakalpak Autonomous Socialist Soviet Republic was transferred to the Uzbek SSR.

The final name for the republic during the Soviet era was adopted by the Russian Constitution of 1937, which renamed it the Russian Soviet Federative Socialist Republic.

In 1943, Karachay Autonomous Oblast was dissolved by Joseph Stalin, when the Karachays were exiled to Central Asia for their alleged collaboration with the Germans and territory was incorporated into the Georgian SSR.

On March 3, 1944, on the orders of Stalin, the Chechen-Ingush ASSR was disbanded and it's population forcibly deported upon the accusations of collaboration with the invaders and separatism. The territory of the ASSR was divided between other administrative units of Russian SFSR and the Georgian SSR.

On October 11, 1944, the Tuvan People's Republic joined the Russian SFSR as the Tuvan Autonomous Oblast, in 1961 becoming an Autonomous Soviet Socialist Republic.

After reconquering Estonia and Latvia in 1944, the Russian SFSR annexed their easternmost territories around Ivangorod and within the modern Pechorsky and Pytalovsky Districts in 1944-1945.

At the end of World War II Soviet troops occupied southern Sakhalin Island and the Kuril Islands, making them part of the RSFSR. The status of the southernmost Kurils remains in dispute with Japan.

On April 17, 1946, the Kaliningrad Oblast — the northern portion of the former German province of East Prussia—was annexed by the Soviet Union and made part of the Russian SFSR.

After the death of Joseph Stalin, March 5, 1953, Georgy Malenkov became the new leader of the USSR.

In January 1954, Malenkov transferred Crimea from the Russian SFSR to the Ukrainian SSR.

On February 8, 1955, Malenkov was officially demoted to deputy Prime Minister. As First Secretary of the Central Committee of the Communist Party, Nikita Khrushchev's authority was significantly enhanced by Malenkov's demotion.

On January 9, 1957, Karachay Autonomous Oblast and Chechen-Ingush Autonomous Soviet Socialist Republic were restored by Khrushchev and they were transferred from the Georgian SSR back to the Russian SFSR.

The Karelo-Finnish SSR was transferred back to the RSFSR as the Karelian ASSR in 1956.

In 1964, Nikita Khrushchev was removed from his position of power and replaced with Leonid Brezhnev. Under his rule, the Russian SFSR and the rest of the Soviet Union went through an era of stagnation. Even after he died in 1982, the era didn’t end until Mikhail Gorbachev took power and introduced liberal reforms in Soviet society.

Flag adopted by the Russian SFSR national parliament in 1991

On May 29, 1990, at his third attempt, Boris Yeltsin was elected the chairman of the Supreme Soviet of the Russian SFSR.

On June 12, 1990, the Congress of People's Deputies of the Republic adopted the Declaration of State Sovereignty of the Russian SFSR, which was the beginning of the "War of Laws", pitting the Soviet Union against the Russian Federation and other constituent republics.

On December 8, 1991, at Viskuli near Brest (Belarus), the President of the Russian SFSR and the heads of Byelorussian SSR and Ukrainian SSR signed the "Agreement on the Establishment of the Commonwealth of Independent States" (known in media as Belavezha Accords). The document, consisting of a preamble and fourteen articles, stated that the Soviet Union ceased to exist as a subject of international law and geopolitical reality. However, based on the historical community of peoples, relations between them, given the bilateral treaties, the desire for a democratic rule of law, the intention to develop their relations based on mutual recognition and respect for state sovereignty, the parties agreed to the formation of the Commonwealth of Independent States. On December 12, the agreement was ratified by the Supreme Soviet of the Russian SFSR by an overwhelming majority: 188 votes for, 6 against, 7 abstentions. On the same day, the Supreme Soviet of the Russian SFSR denounced the Treaty on the Creation of the USSR and recalled all Russian deputies from the Supreme Soviet of the Soviet Union. The legality of this act is the subject of discussions because, according to the 1978 Constitution (Basic Law) of the Russian SFSR, the Russian Supreme Soviet had no right to do so.[18] However, by this time the Soviet government had been rendered more or less impotent, and was in no position to object. Although the December 12 vote is sometimes reckoned as the moment that the RSFSR seceded from the collapsing Soviet Union, this is not the case. It appears that the RSFSR took the line that it was not possible to secede from an entity that no longer existed.

On December 24, Yeltsin informed the Secretary-General of the United Nations that by agreement of the member states of the CIS Russian Federation would assume the membership of the Soviet Union in all UN organs (including permanent membership in the UN Security Council). Thus, Russia is considered to be an original member of the UN (since October 24, 1945) along with Ukraine (Ukrainian SSR) and Belarus (Byelorussian SSR). On December 25—just hours after Gorbachev resigned as president of the Soviet Union—the Russian SFSR was renamed the Russian Federation (Russia), reflecting that it was now a sovereign state with Yeltsin assuming the Presidency.[8] The change was originally published on January 6, 1992 (Rossiyskaya Gazeta). According to law, during 1992, it was allowed to use the old name of the RSFSR for official business (forms, seals and stamps). The Russian Federation's Constitution (Fundamental Law) of 1978, though with the 1991–1992 Amendments, remained in effect until the 1993 Russian constitutional crisis.

The name "Russian Federation" had also been used in Soviet times.[19]