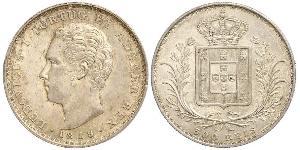 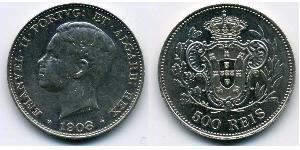 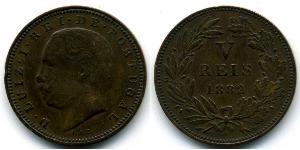 The nucleus of the Portuguese state was the County of Portugal (Portuguese: Condado de Portugal), established in the 9th century as part of the Reconquista, by Vímara Peres, a vassal of the King of Asturias. The county became part of the Kingdom of León (Castilian: Reino de León; Portuguese: Reino de Leão) in 1097, and the Counts of Portugal established themselves as rulers of an independent kingdom in the 12th century, following the battle of São Mamede. The kingdom was ruled by the Alfonsine Dynasty until the 1383–85 Crisis, after which the monarchy passed to the House of Aviz.

During the 15th and 16th century, Portuguese exploration established a vast colonial empire. From 1580 to 1640, the kingdom of Portugal was in personal union with Habsburg Spain.

After the Portuguese Restoration War of 1640–1668, the kingdom passed to the House of Braganza. From this time, the influence of Portugal declined, but it remained a major power due to its most valuable colony, Brazil. After the independence of Brazil, Portugal sought to establish itself in Africa, but was ultimately forced to yield to the British interests, leading to the collapse of the monarchy in the 5 October 1910 revolution and the establishment of the First Portuguese Republic.

The Kingdom of Portugal finds its origins in the County of Portugal (1093–1139). The Portuguese County was a semi-autonomous county of the Kingdom of León. Independence from León took place in three stages:

Once Portugal was independent, D. Afonso I's descendants, members of the Portuguese House of Burgundy, would rule Portugal until 1383. Even after the change in royal houses, all the monarchs of Portugal were descended from Afonso I, one way or another, through both legitimate and illegitimate links.

An anachronous map of the Portuguese Empire.

With the start of the 20th century, Republicanism grew in numbers and support in Lisbon among progressive politicians and the influential press. However a minority with regard to the rest of the country, this height of republicanism would benefit politically from the Lisbon Regicide on 1 February 1908. When returning from the Ducal Palace at Vila Viçosa, King Carlos I and the Prince Royal Luís Filipe were assassinated in the Terreiro do Paço, in Lisbon. With the death of the king and his heir, Carlos I's second son would become king as King Manuel II of Portugal. Manuel's reign, however, would be short-lived, ending by force with the 5 October 1910 revolution, sending Manuel into exile in England and giving way to the Portuguese First Republic.

On 19 January 1919, the Monarchy of the North was proclaimed in Porto. The monarchy would be deposed a month later and no other monarchist counterrevolution in Portugal has happened since.

After centuries of Portuguese dominion in Angola, the Kingdom of Kongo was made a vassal state of the Portuguese kingdom, its king pledging allegiance to the King of Portugal.