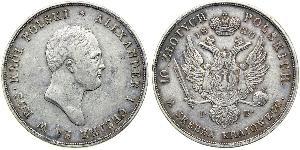 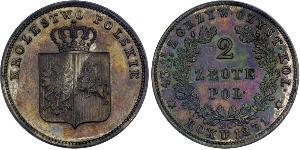 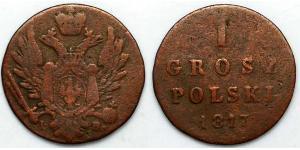 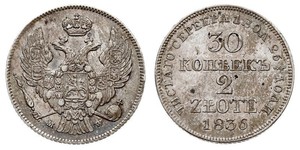 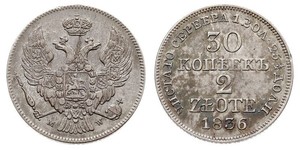 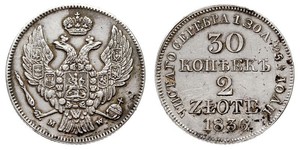 Administrative division of the Kingdom of Poland, 1831. This map represents the period 1816-1844.

Administrative divison of Congress Poland in 1830

Eagle of officer of the Army of Congress Poland The Kingdom of Poland (Polish: Królestwo Polskie [kruˈlɛstfɔ ˈpɔlskʲɛ]; Russian: Королевство Польское, Царство Польское, Korolevstvo Polskoye, Tsarstvo Polskoye, Russian pronunciation: [kərɐˈlʲɛfstvə ˈpolʲskəɪ, ˈtsarstvə ˈpolʲskəɪ], Polish: Carstwo Polskie, translation: Tsardom of Poland), informally known as Congress Poland (Polish: Królestwo Kongresowe [kruˈlɛstfɔ kɔnɡrɛˈsɔvɛ] or Russian Poland), created in 1815 by the Congress of Vienna, was a real union of the Russian part of Poland with the Russian Empire. It was gradually politically integrated into Russia over the course of the 19th century, made an official part of the Russian Empire in 1867, and finally replaced during the Great War by the Central Powers in 1915 with the theoretically existing Regency Kingdom of Poland.[a]

Though officially the Kingdom of Poland was a state with considerable political autonomy guaranteed by a liberal constitution, its rulers, the Russian Emperors, generally disregarded any restrictions on their power. Thus effectively it was little more than a puppet state of the Russian Empire.[1][2] The autonomy was severely curtailed following uprisings in 1830–31 and 1863, as the country became governed by namestniks, and later divided into guberniya (provinces).[1][2] Thus from the start, Polish autonomy remained little more than fiction.[3]

The territory of the Kingdom of Poland roughly corresponds to the Kalisz Region and the Lublin, Łódź, Masovia, Podlasia and Świętokrzyskie voivodeships of Poland.

Although the official name of the state was the Kingdom of Poland, in order to distinguish it from other Kingdoms of Poland, it was sometimes referred to as "Congress Poland".

The Kingdom of Poland was created out of the Duchy of Warsaw, a French client state, at the Congress of Vienna in 1815 when the great powers reorganized Europe following the Napoleonic wars. The creation of the Kingdom created a partition of Polish lands in which the state was divided among Russia, Austria and Prussia.[4] The Congress was important enough in the creation of the state to cause the new country to be named for it.[5][6] The Kingdom lost its status as a sovereign state in 1831 and the administrative divisions were reorganized. It was sufficiently distinct that its name remained in official Russian use, although in the later years of Russian rule it was replaced [7] with the Privislinsky Krai (Russian: Привислинский Край). Following the defeat of the November Uprising its separate institutions and administrative arrangements were abolished as part of increased Russification to be more closely integrated with the Russian Empire. However, even after this formalized annexation, the territory retained some degree of distinctiveness and continued to be referred to informally as Congress Poland until the Russian rule there ended as a result of the advance by the armies of the Central Powers in 1915 during World War I.

Originally, the Kingdom had an area of roughly 128,500 km2 and a population of approximately 3.3 million. The new state would be one of the smallest Polish states ever, smaller than the preceding Duchy of Warsaw and much smaller than the Polish-Lithuanian Commonwealth which had a population of 10 million and an area of 1 million km2.[6] Its population reached 6.1 million by 1870 and 10 million by 1900. Most of the ethnic Poles in the Russian Empire lived in the Congress Kingdom, although some areas outside it also contained Polish majority.

The Kingdom of Poland largely re-emerged as a result of the efforts of Adam Jerzy Czartoryski,[8] a Pole who aimed to resurrect the Polish state in alliance with Russia. The Kingdom of Poland was one of the few contemporary constitutional monarchies in Europe, with the Emperor of Russia serving as the Polish King. His title as chief of Poland in Russian, was Tsar, similar to usage in the fully integrated states within the Empire (Georgia, Kazan, Siberia).

Theoretically the Polish Kingdom in its 1815 form was a semi-autonomous state in personal union with Russia through the rule of the Russian Emperor. The state possessed the Constitution of the Kingdom of Poland, one of the most liberal in 19th century Europe,[8] a Sejm (parliament) responsible to the King capable of voting laws, an independent army, currency, budget, penal code and a customs boundary separating it from the rest of Russian lands. Poland also had democratic traditions (Golden Liberty) and the Polish nobility deeply valued personal freedom. In reality, the Kings had absolute power and the formal title of Autocrat, and wanted no restrictions on their rule. All opposition to the Emperor of Russia was suppressed and the law was disregarded at will by Russian officials.[9] Though the absolute rule demanded by Russia was difficult to establish due to Poland's liberal traditions and institutions, the independence of the Kingdom lasted only 15 years; initially Alexander I used the title of the King of Poland and was obligated to observe resolutions of the constitution. However, in time the situation changed and he granted the viceroy, Grand Duke Konstantin Pavlovich, almost dictatorial powers.[5] Very soon after Congress of Vienna resolutions were signed, Russia ceased to respect them. In 1819, Alexander I abolished freedom of the press and introduced preventory censorship. Resistance to Russian control began in the 1820s.[3] Russian secret police commanded by Nikolay Nikolayevich Novosiltsev started persecution of Polish secret organizations and in 1821 the King ordered the abolition of Freemasonry, which represented Poland's patriotic traditions.[3] Beginning in 1825, the sessions of the Sejm were held in secret.

Uprisings and loss of autonomy[edit]

Alexander I's successor, Nicholas I was crowned King of Poland on 24 May 1829 in Warsaw, but he declined to swear to abide by the Constitution and continued to limit the independence of the Polish Kingdom. Nicholas' rule promoted the idea of Official Nationality, consisting of Orthodoxy, Autocracy, and Nationality. In relation to Poles, those ideas meant assimilation: turning them into loyal Orthodox Russians.[3] The principle of Orthodoxy was the result of the special role it played in Russian Empire, as the Church was in fact becoming a department of state,[3] and other religions discriminated against; for instance, Papal bulls could not be read in the Kingdom of Poland without agreement from the Russian government.

The rule of Nicholas also meant end of political traditions in Poland; democratic institutions were removed, an appointed—rather than elected—centralized administration was put in place, and efforts were made to change the relations between the state and the individual. All of this led to discontent and resistance among the Polish population.[3] In January 1831, the Sejm deposed Nicholas I as King of Poland in response to his repeated curtailing of its constitutional rights. Nicholas reacted by sending Russian troops into Poland, resulting in the November Uprising.[10]

Following an 11-month military campaign, the Kingdom of Poland lost its semi-independence and was subsequently integrated much more closely with the Russian Empire. This was formalized through the issuing of the Organic Statute of the Kingdom of Poland by the Emperor in 1832, which abolished the constitution, army and legislative assembly. Over the next 30 years a series of measures bound Congress Poland ever more closely to Russia. In 1863 the January Uprising broke out, but lasted only two years before being crushed. As a direct result, any remaining separate status of the Kingdom was removed and the political entity was directly incorporated into the Russian Empire. The formerly unofficial name of Privislinsky Krai (Russian: Привислинский Край), i.e., 'Vistula Land', replaced 'Kingdom of Poland' as the area's official name and the area became a namestnichestvo under the control of a namestnik until 1875, when it became a Guberniya.[dubious – discuss]

In theory, Congress Poland possessed one of the most liberal governments of the time in Europe,[8] but in practice the area was a puppet state of the Russian Empire. The liberal provisions of the constitution, and the scope of the autonomy, were often disregarded by the Russian officials.[6][8][9]

Main article: Namiestnik of the Kingdom of Poland

The office of "Namestnik" was introduced in Poland by the 1815 constitution of Congress Poland. The Viceroy was chosen by the King from among the noble citizens of the Russian Empire or the Kingdom of Poland. The Viceroy supervised the entire public administration and, in the monarch's absence, chaired the Council of State, as well as the Administrative Council. He could veto the councils' decisions; other than that, his decisions had to be countersigned by the appropriate government minister. The Viceroy exercised broad powers and could nominate candidates for most senior government posts (ministers, senators, judges of the High Tribunal, councilors of state, referendaries, as well as bishops and archbishops). He had no competence in the realms of finances and foreign policy; his military competence varied.

The office of "namestnik" or Viceroy was never officially abolished; however, after the January 1863 Uprising it disappeared. The last namestnik was Friedrich Wilhelm Rembert von Berg, who served from 1863 to his death in 1874. No namestnik was named to replace him;[11] however, the role of namestnik—viceroy of the former Kingdom passed to the Governor-General of Warsaw[12]—or, to be more specific, of the Warsaw Military District (Polish: Warszawski Okręg Wojskowy, Russian: Варшавский Военный Округ).

The governor-general answered directly to the Emperor and exercised much broader powers than had the namestnik. In particular, he controlled all the military forces in the region and oversaw the judicial systems (he could impose death sentences without trial). He could also issue "declarations with the force of law," which could alter existing laws.

The administrative divisions of the Kingdom changed several times over its history. Over the next several decades, various smaller reforms were carried out, either changing the smaller administrative units or merging/splitting various subdivisions.

Immediately after its creation in 1815–1816, the Kingdom of Poland was divided into departments, a relic from the times of the French-dominated Duchy of Warsaw.

On January 16, 1816 the administrative division was reformed from the departments of the Duchy of Warsaw into the more traditionally Polish voivodeships, obwóds and powiats. There were eight voivodeships. On 7 March 1837, in the aftermath of the November Uprising earlier that decade, the administrative division was reformed once again, bringing Congress Poland closer to the structure of the Russian Empire, with the introduction of guberniyas (governorate, Polish spelling gubernia). In 1842 powiats were renamed okręgs, and obwóds were renamed powiats. In 1844 several governorates were merged with others, and some others renamed. Five governorates remained.

The 1867 reform, initiated after the failure of the January Uprising, was designed to tie the Congress Kingdom (now de facto the Vistulan Country) more tightly to the administration structure of the Russian Empire. It divided larger governorates into smaller ones. A new lower level entity, gmina, was introduced. The existing five governorates were restructured into 10. The 1912 reform created a new governorate—Kholm Governorate—from parts of the Sedlets and Lublin Governorates. It was split off from the Vistulan Country and made part of the Southwestern Krai of the Russian Empire.[13]

a ^ Sources agree that after the fall of the January Uprising in 1864, the autonomy of Congress Poland was drastically reduced. They disagree however on whether the Kingdom of Poland, colloquially known as Congress Poland, as a state, was officially replaced by Vistula Land (Privislinsky Krai), a province of the Russian Empire, as many sources still use the term Congress Poland for the post-1864 period. The sources are also unclear as to when Congress Poland (or Vistula land) officially ended; some argue it ended when the German and Austro-Hungarian occupying authorities assumed control; others, that it ended with the creation of the Kingdom of Poland in 1916; finally, some argue that it occurred only with the creation of the independent Republic of Poland in 1918. Examples: