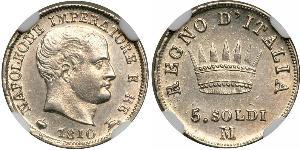 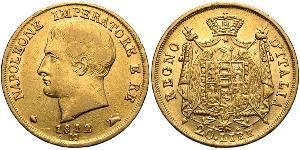 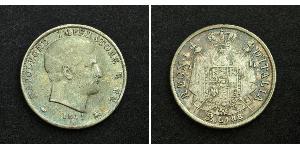 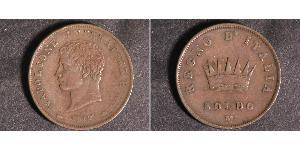 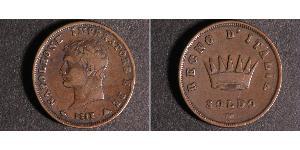 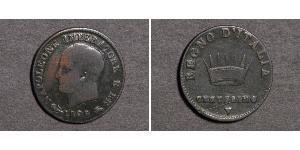 From Wikipedia, the free encyclopedia
Jump to: navigation, search
For other kingdoms of Italy, see Kingdom of Italy (disambiguation).

The Kingdom of Italy (Italian: Regno d'Italia; French: Royaume d'Italie) was a French client state founded in Northern Italy by Napoleon I, fully influenced by revolutionary France, that ended with his defeat and fall. It was governed throughout its existence by Napoleon's step-son, Eugène de Beauharnais, who served as Viceroy for his step-father.

The Kingdom of Italy was born on March 17, 1805, when the Italian Republic, whose president was Napoleon Bonaparte, became the Kingdom of Italy, with Napoleon I as King of Italy, and the 24-year-old Eugène de Beauharnais his viceroy. Napoleon I was crowned at the Duomo di Milano, Milan on May 26, with the Iron Crown of Lombardy. His title was "Emperor of the French and King of Italy" (French: Empereur des Français et Roi d'Italie), showing the importance of this Italian Kingdom for him.[1]

Even though the republican Constitution was never formally abolished, a series of Constitutional Statutes completely altered it. The first one was proclaimed two days after the birth of the kingdom, on March 19,[2] when the Consulta declared Napoleon as king and established that his sons would succeed him, even if the French and the Italian crowns had to be separated after the Emperor's death. The second one, dating from March 29, and regulated the regency, the Great Officials of the kingdom, and the oaths.

The most important was the third, proclaimed on June 5, being the real constitution of the kingdom: Napoleon was the head of State, and had the full powers of government; in his absence, he was represented by the Viceroy, Eugène de Beauharnais. The Consulta, Legislative Council, and Speakers, were all merged in a Council of State, whose opinions became only optional and not binding for the king.

The Legislative Body, the old parliament, remained in theory, but it never summoned after 1805; the Napoleonic Code was introduced.

The fourth Statute, decided on February 16, 1806, indicated Beauharnais as the heir to the throne.

The fifth and the sixth Statutes, on March 21, 1808, separated the Consulta from the Council of State, and renamed it the Senate, with the duty of informing the king about the wishes of the most important subjects.

The seventh Statute, on September 21, created a new nobility of dukes, counts and barons; the eighth and the ninth, on March 15, 1810, established the annuity for the members of the royal family. In 1812, a Court of Accounts was added.

The government had seven ministers:

Kingdom of Italy in 1807, shown in yellow

Originally, the Kingdom consisted of the territories of the Italian Republic: former Duchy of Milan, Duchy of Mantua, Duchy of Modena, the western part of the Republic of Venice, part of the Papal States in Romagna, and the province of Novara.

After the defeat of the Third Coalition and the consequent Treaty of Pressburg, on May 1, 1806, the Kingdom was given by Austria the eastern and remaining part of the Venetian territories, including Istria and Dalmatia down to Kotor (then called Cattaro), even if it had to give Massa and Carrara to Elisa Bonaparte's Principality of Lucca and Piombino. The Duchy of Guastalla was annexed on May 24.

With the Convention of Fontainebleau with Austria of October 10, 1807, Italy ceded Monfalcone to Austria and gained Gradisca, putting the new border on the Isonzo River.

The conquered Republic of Ragusa was annexed in spring 1808 by general Marmont. That was the only time in modern history that Ragusa was united to Italy. On April 2, 1808, following the dissolution of the Papal States, the Kingdom annexed the present-day Marches. At its maximum extent, the Kingdom had 6,700,000 inhabitants and was composed by 2,155 communes.

The final arrangement arrived after the new defeat of Austria: Emperor Napoleon and King Maximilian I Joseph of Bavaria signed the Treaty of Paris on February 28, 1810, deciding an exchange of territories involving Italy too.

On rewards in Germany, Bavaria ceded southern Tirol to the Kingdom of Italy, which in its turn ceded Istria and Dalmatia (with Ragusa) to France, incorporating the Adriatic territories into newly created the French Illyrian Provinces. Small changes to the borders between Italy and France in Garfagnana and Friuli came in act on August 5, 1811.

In practice, the Kingdom was a dependency of the French Empire.[3]

The Kingdom served as a theater in Napoleon's operations against Austria during the wars of the various coalitions. Trading with the United Kingdom was forbidden.

The army of the kingdom, inserted into the Grande Armée, took part in all of Napoleon's campaigns. In the course of its existence from 1805 to 1814 the Kingdom of Italy provided Napoleon I with roughly around 200,000 soldiers.[5][6]

In 1805 Italian troops served on garrison duty along the English Channel, during 1806-1807 they took part in the sieges of Kolberg and Danzig and fought in Dalmatia.[7] From 1808 to 1813 whole Italian divisions served in Spain, especially distinguishing themselves under Suchet at Tarragona and Saguntum.[8][9]

In 1809, Eugène's Army of Italy formed the right wing of Napoleon I's invasion of the Austrian Empire, winning a considerable victory at Raab and having a respectable share in the victory at Wagram.[7][10]

In 1812, Eugène de Beauharnais marched 27,000 troops of the Kingdom of Italy into Russia.[11] The Italian contingent distinguished themselves at Borodino and Maloyaroslavets,[12][13] receiving the recognition:[14]

"The Italian army had displayed qualities which entitled it evermore to take rank amongst the bravest troops of Europe."

Only 1,000-2,000 Italians survived the Russian campaign, but they returned with most of their banners secured.[11][15] In 1813, Eugène de Beauharnais held out as long as possible against the onslaught of the Austrians[12] (Battle of the Mincio) and was later forced to sign an armistice in February 1814.[16]

Palace of the Senate, Milan.

The administrative system of the Kingdom was firstly drawn by a law on June 8, 1805. The state was divided, following the French system, in 14 départements, the twelve ones inherited from the republican era plus Adda (Sondrio) and Adige (Verona). The chief of the department, the prefect, was the State's representative in each province, improved the administrative decisions of the central government, controlled the local authorities, led of the police and, differently from the republican era, had all the executive powers in its territory. The local legislative body was the General Council, composed by the representatives of the communes.

The departments were divided in districts, equivalent to the French arrondissements. The chief of the district was the vice-prefect, which had similar powers to the prefect, but over a smaller area. The local legislative body was the District Council, composed by eleven members. The districts were divided, as in France, in cantons, seats of Tax collectors and Justices of the peace.

The cantons were divided in communes. The communes had a City Council (Consiglio Comunale) of fifteen, thirty or forty members, chosen by the king or the prefect depending by the commune size. The Council elected two, four or six Elders for the ordinary administration, helped by a City Secretary. The chief of biggest communes was the royal Podestà, when in smaller communes there was a prefectoral Mayor. All the city offices were hold only by owners and traders, and the leadership of the owners was assured.

During the kingdom's life, the administrative system of the State changed for domestic and international reasons. Following the defeat of Austria and the Treaty of Pressburg, Napoleon annexed to Italy the territory of former Republic of Venice, as announced on March 30, 1806, and ratified on May 1. Seven new departments were created, six in the Venetian mainland, and one in Istria (Capodistria), whereas Dalmatia received special institutions led by the General Provider Mr. Dandolo, and maintained its own laws. On July 14, 1807, the government passed a decree that reduced the number of the communes. Following the dissolution of the Papal States, the kingdom was extended along the Adriatic coast, and on April 20, 1808, three new departments were established. The final territorial change came in action on June 10, 1810, when, as announced by Napoleon on previous May 28, Italy lost Istria and the never fully incorporated Dalmatia, gaining as reward all the southern Tirol up to the city of Bolzano, creating the 24th and last department: Haut Adige.[18]

The language used officially in the Kingdom of Italy was the Italian. The French language was used for ceremonies and in all relationships with France.

The education system was implemented as universal for all children.

During the French rule of the area of Istria and Dalmatia the schools were in Italian, until they were part of the Napoleonic Kingdom of Italy.[19]

The Slovenian Marko Trogrli in his essay "The French school system in French Dalmatia" wrote that "Vincenzo Dandolo, the French governor of Dalmatia as well as Bartolomeo Benincasa, an official from the local (Dalmatian) Education Department, published in May 1807 a plan for the Province's public education (Il piano generale della pubblica istruzione in Dalmazia), which had to be consistent with the education system throughout the Napoleonic Kingdom of Italy....Instruction was to be in Italian".[20]

The Kingdom of Italy in 1812, when it was extended from Bolzano to central Adriatic Italy ( Marche), losing at the same time Istria and Dalmatia

During its last maximum extension (from 1809 to 1814), the Kingdom lost Istria/Dalmatia and consisted of 24 departments. When Napoleon abdicated to both the thrones of France and Italy on April 11, 1814, Eugène de Beauharnais was lined up the Mincio River with his army against the German invasion, and he attempted to be crowned king. The Senate of the Kingdom was summoned on April 17, but the senators showed themselves undecided in that chaotic situation. When a second session of the assembly took place on April 20, the Milan insurrection foiled the Viceroy's plan. In the riots, finance minister Count Giuseppe Prina was massacred by the crowd, and the Great Electors disbanded the Senate and called the Austrian forces to protect the city, while a Provisional Regency Government under the presidency of Carlo Verri was appointed.

Eugène surrendered on April 23, and was exiled to Bavaria by the Austrians, who occupied Milan on April 28. On April 26, the Empire appointed Annibale Sommariva as Imperial Commissioner of Lombardy, while many taxes were abolished or reduced by the Provisional Regency. Finally, on May 25, the Supreme Imperial Commissioner Count Heinrich von Bellegarde took all the powers in Lombardy, and former monarchies in Modena, Romagna and Piedmont were gradually re-established; on May 30, the Treaty of Paris was signed, and the remains of the kingdom were annexed by the Austrian Empire, as announced by Count Bellegarde on June 12.