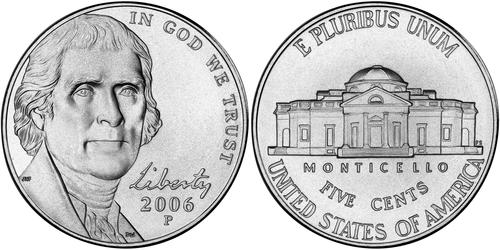 2006-2018,
Schön-381, KM-381 Country United States Years 2006-2018 Value 5 Cents (0.05&nbsp;USD) Metal Copper-nickel Weight 5 g Diameter 21.21 mm
Obverse The forward-facing portrait of Thomas Jefferson, the 3rd President of the United States from 1801 to 1809, according to the first Rembrandt Peale life study of Jefferson done in 1800, accompanied with the word “Liberty” presented in Jefferson’s own handwriting, surrounded with the motto: “IN GOD WE TRUST” Lettering: IN GOD WE TRUST Liberty 2006 P JNF DW Engraver: Jamie Franki, Donna Weaver Reverse A representation of Monticello, President Thomas Jefferson’s Virginia home, is accompanied with the legend “MONTICELLO” and surrounded with the facial value in full, the motto “E PLURIBUS UNUM” and the lettering “UNITED STATES OF AMERICA” Lettering: E PLURIBUS UNUM MONTICELLO FIVE CENTS UNITED STATES OF AMERICA FS Engraver: Felix Schlag Felix Oscar Schlag was the designer of the United States five cent coin in use from 1938 to 2004. He was born to Karl and Teresa Schlag in Frankfurt, Germany, and moved to the United States in 1929. 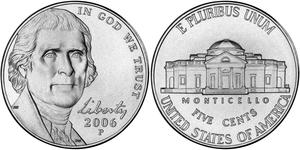 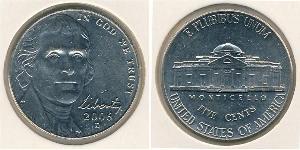