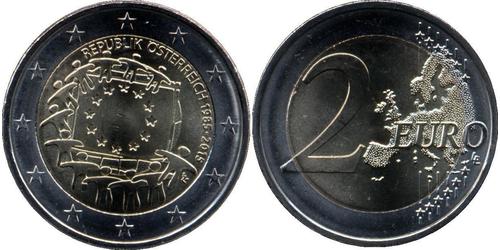 2015,
Schön-431, KM-3247 Country Austria Year 2015 Value 2 Euro Metal Bi-Metallic Nickel-brass clad Nickel center in Copper-nickel ring Weight 8.5 g Diameter 25.75 mm
Commemorative issue 30th Anniversary of the Flag of the European Union Obverse The designs show the EU flag as a symbol that unites people and cultures with shared visions and ideals for a better common future. Twelve stars that morph into human figures are embracing the birth of a new Europe. At the top right, in semi-circle, are the issuing country and the years ‘1985-2015’. At the bottom right are the initials of the artist (Georgios Stamatopoulos). The coin’s outer ring bears the 12 stars of the European Union. Lettering: REPUBLIK ÖSTERREICH 1985-2015 ΓΣ Engraver: Georgios Stamatopoulos Reverse A map, next to the facial value, shows the European continent without borders. Lettering: 2 EURO LL Engraver: Luc Luycx Luc Luycx is the designer of the common side of the euro coins. Luycx is a computer engineer, and medallist living in Dendermonde, Belgium, and has worked for the Royal Belgian Mint for 15 years. He designed the euro coins in 1996. 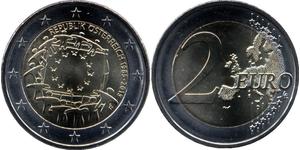 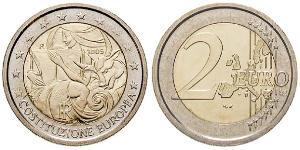 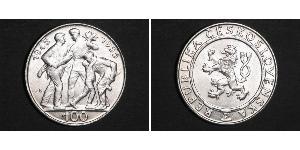 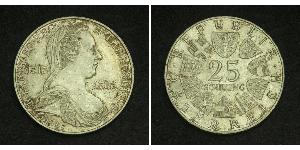