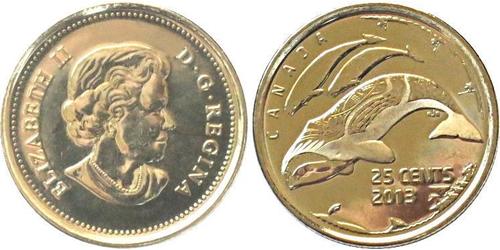 2013,
Country Canada Year 2013 Value 25 Cents Metal Three-ply nickel plated steel Weight 4.4&nbsp;g Diameter 23.88&nbsp;mm
Commemorative issue Life in the North Obverse Bust of Queen Elizabeth II in centre, encircled by lettering. Lettering: ELIZABETH II D•G•REGINA Engraver: Susanna Blunt Susanna Blunt is a Canadian portrait artist who designed the most recent portrait of Queen Elizabeth II on the current Canadian coinage, which began in 2003. She was born in Harbin, China, the daughter of an English banker. Blunt started her studies at the Banff School of Fine Arts as a young teenager. Reverse Two beluga whales swim alongside a bowhead whale (Balaena mysticetus). 1 whale, 1 Umiak with Inuit hunters followed by three kayaks along rim. Regarding the coins where the bowhead whale is frosted, there are two sub-varieties : on one, the fin tip that sticks out under the belly is frosted, while on the other one it is not. Lettering: CANADA nJn 25 CENTS 2013 Engraver: Tim Pitsiulak 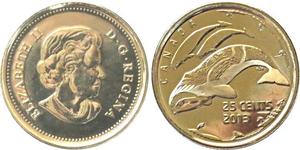 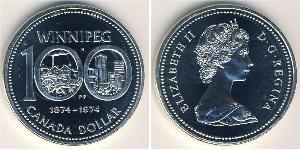 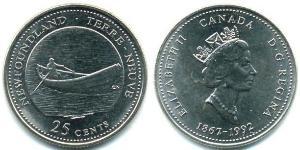