Reverse: Crown of the German Empire above heraldic eagle of Germany with Prussian shield at chest and star order.
Legend: DEUTSCHES REICH / 20 – M. / 1874

He studied in Berlin and T&uuml;bingen.

On 13 July 1846 he married Grand Duchess Olga Nikolaievna of Russia, daughter of Tsar Nicholas I and Charlotte of Prussia. Charlotte was a daughter of Frederick William III of Prussia and Louise of Mecklenburg-Strelitz. She took the name Alexandra upon her marriage. Karl acceded to the throne upon his father’s death in 1864.

Under Charles' leadership, in 1871 W&uuml;rttemberg became a part of the German Empire.

He died, childless, in Stuttgart on 6 October 1891, and was succeeded as King of W&uuml;rttemberg by his sister’s son, William II. He is buried, together with his wife, in the Old Castle in Stuttgart. 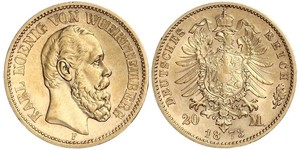 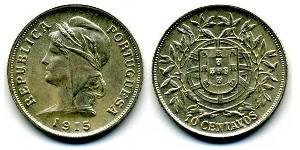