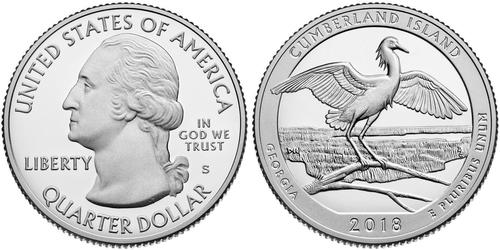 2018,
Country United States Year 2018 Value Quarter Dollar = 25 Cents (0.25&nbsp;USD) Metal Silver (.900) Weight 6.25&nbsp;g Diameter 24.3&nbsp;mm
Commemorative issue Cumberland Island National Seashore, Georgia Obverse The portrait in left profile of George Washington, the first President of the United States from 1789 to 1797, is accompanied with the motto “IN GOD WE TRUST” and the lettering “LIBERTY” surrounded with the denomination and the inscription “UNITED STATES OF AMERICA” Lettering: UNITED STATES OF AMERICA LIBERTY IN GOD WE TRUST QUARTER DOLLAR Engraver: John Flanagan John Flanagan (1865–1952)was a sculptor who was known for his designs for coins and medals. Reverse Snowy egret posing at the edge of a salt marsh, ready for flight. Lettering: CUMBERLAND ISLAND GEORGIA 2018 E PLURIBUS UNUMัั Engraver: Don Everhart Donald Nelson Everhart II is an American coin and medal engraver-medalist, and sculptor who has worked for the private Franklin Mint, as a freelance designer, and since 2004 has worked for the United States Mint in Philadelphia. 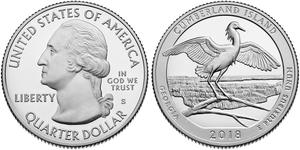 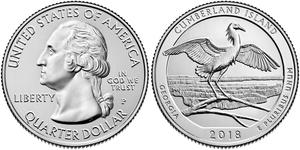 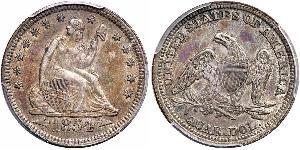