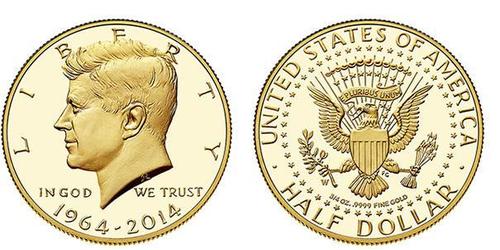 2014,
KM-587 Country United States Year 2014 Value Half Dollar (0.50&nbsp;USD) Metal Gold (.9999) Weight 23.328&nbsp;g Diameter 30.61&nbsp;mm
Commemorative issue 50th Anniversary of Kennedy Half Dollar Obverse A portrait of John Fitzgerald Kennedy, the youngest-ever-elected president. United States Mint Chief Engraver Gilroy Roberts based this profile on a portrait prepared for Kennedy’s presidential medal. Lettering: LIBERTY, IN GOD WE TRUST, 1964-2014 Engraver: Gilroy Roberts Gilroy Roberts was a sculptor, gemstone carver, and the ninth Chief Engraver of the United States Mint between 1948 and 1964. He is notable for having designed the obverse of the Kennedy Half Dollar. Reverse Based on the Presidential Seal and was created by United States Mint Sculptor-Engraver Frank Gasparro. It consists of a heraldic eagle with a shield on its breast holding a symbolic olive branch and bundle of 13 arrows. Lettering: UNITED STATES OF AMERICA, HALF DOLLAR and ¾ OZ. .9999 FINE GOLD 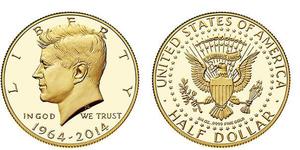 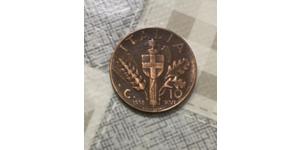