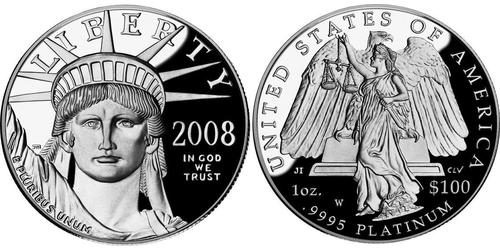 2008,
KM-437 Country United States Year 2008 Value 100 Dollars (100&nbsp;USD) Metal Platinum (.9995) Weight 31.105&nbsp;g Diameter 32.7&nbsp;mm
Commemorative issue Judicial Branch Obverse Statue of Liberty Lettering: LIBERTY 2008 JM IN GOD WE TRUST E PLURIBUS UNUM Engraver: John M. Mercanti John M. Mercanti is an American sculptor and engraver. He was the twelfth Chief Engraver of the United States Mint until his retirement in late 2010. Reverse “Lady Justice, a classic symbol dating back to Greek and Roman times. In her right hand, the scales are suspended from one finger, representing the delicate balance of the law. In the other hand she holds the sword, signifying the power that is held by those making the decision. ” Lettering: UNITED STATES OF AMERICA JI CLV 1oz. $100 W .9995 PLATINUM Translation: Joel Iskowitz/Charles L. Vickers Engraver: Joel Iskowitz 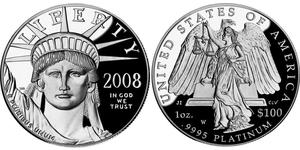 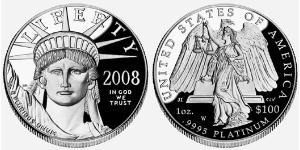 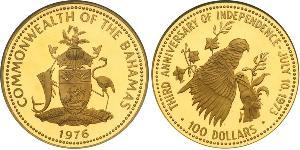 I have a 1907 one rupee coin which i want to sell i want to sell this coin for 5000000000 whoever want contact me if my number is switched off message me on whatsapp my whatsapp is always on
view
You may be interested in ...
Market