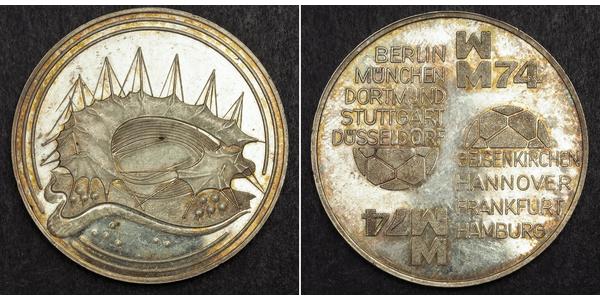 Olympiastadion (German pronunciation: [ʔoˈlʏmpi̯aːˌʃtaːdi̯ɔn]) is a stadium located in Munich, Germany. Situated at the heart of the Olympiapark München in northern Munich, the stadium was built as the main venue for the 1972 Summer Olympics. With an original capacity of 80,000, the stadium also hosted many major football matches including the 1974 FIFA World Cup Final and the UEFA Euro 1988 Final. It hosted the European Cup Finals in 1979, 1993 and 1997. Its current capacity is 69,250. Until the construction of Allianz Arena for the 2006 FIFA World Cup, the stadium was home to FC Bayern Munich and TSV 1860 Munich.:

The 1974 FIFA World Cup was the 10th FIFA World Cup, and was played in West Germany (including West Berlin) between 13 June and 7 July. The tournament marked the first time that the current trophy, the FIFA World Cup Trophy, created by the Italian sculptor Silvio Gazzaniga, was awarded. The previous trophy, the Jules Rimet Trophy, had been won for the third time by Brazil in 1970 and awarded permanently to the Brazilians. This was the first out of three World Cups to feature two rounds of group stages.

The host nation won the title, beating the Netherlands 2–1 in the final at Munich's Olympiastadion. The victory was the second for West Germany, who had also won in 1954. Australia, East Germany, Haiti and Zaire made their first appearances at the final stage, with East Germany making their only appearance before Germany was reunified in 1990.