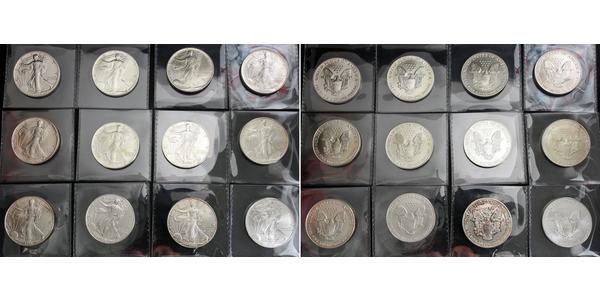 The American Silver Eagle is the official silver bullion coin of the United States. It was first released by the United States Mint on November 24, 1986. It is struck only in the one-troy ounce size, which has a nominal face value of one dollar and is guaranteed to contain one troy ounce of 99.9% pure silver. It is authorized by Title II of Public Law 99-61 (Liberty Coin Act, approved July 9, 1985) and codified as 31 U.S.C. § 5112(e)-(h). Its content, weight, and purity are certified by the United States Mint. In addition to the bullion version, the United States Mint has produced a proof version and an uncirculated version for coin collectors. The Silver Eagle has been produced at three mints: the Philadelphia Mint, the San Francisco Mint, and the West Point Mint. The American Silver Eagle bullion coin may be used to fund Individual Retirement Account investments.