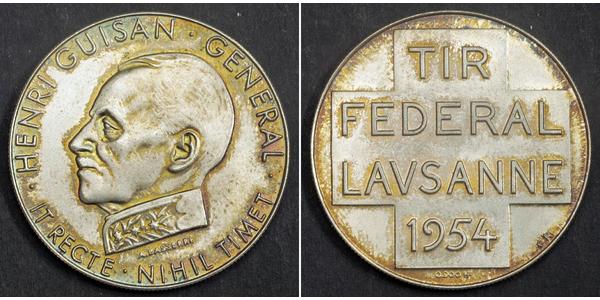 Henri Guisan (21 October 1874 – 7 April 1960) was a Swiss army officer who held the office of the General of the Swiss Armed Forces during the Second World War. He was the fourth and the most recent man to be appointed to the rarely used Swiss rank of General, and was possibly Switzerland's most famous soldier. He is best remembered for effectively mobilizing the Swiss Armed Forces and Swiss people in order to prepare resistance against a possible invasion by Nazi Germany in 1940. Guisan was voted the fourth-greatest Swiss figure of all time in 2010

Lausanne is a city in Romandy, the French-speaking part of Switzerland, and is the capital of the canton of Vaud. The seat of the district of Lausanne, the city is situated on the shores of Lake Geneva (French: Lac Léman). It faces the French town of Évian-les-Bains, with the Jura mountains to its north-west. Lausanne is located 62 km (39 mi) northeast of Geneva.