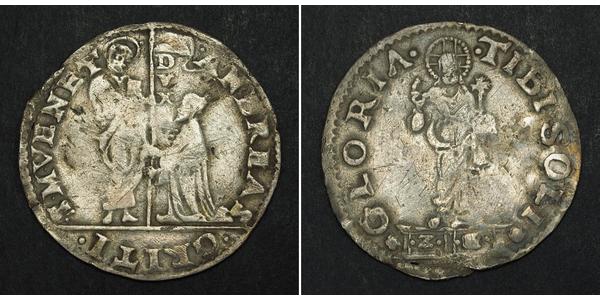 Gritti was born in Bardolino, near Verona. He spent much of his early life in Constantinople, looking after Venetian interests. In 1499, he was imprisoned on charges of espionage, but escaped execution due to his friendship with the vizier, and was released several years later.

In the early sixteenth century Venice lost nearly all its territory  on the Italian mainland, and Gritti played an important part in the  events connected with this loss and the eventual return to the status quo ante. In 1509, after the Venetian defeat at the Battle of Agnadello, Gritti was appointed as proveditor to the Venetian army in Treviso; ordered by the Council of Ten to support revolts against the invaders, he successfully engineered the return of Padua to Venetian hands, and its subsequent defence against the Emperor. In 1510, following the death of Nicolo di Pitigliano,  Gritti took command of Venice's army, but was forced to withdraw to  Venice by French advances. He continued as proveditor through end of  the League of Cambrai and the subsequent war of the Holy League. In 1512, he led the negotiations with Francis I that resulted in Venice leaving the League and allying with France.

Elected Doge in 1523, Gritti concluded a treaty with Charles V, ending Venice's active involvement in the Italian Wars.  He attempted to maintain the neutrality of the Republic in the face of  the continued struggle between Charles and Francis, urging both to turn  their attention to the advances of the Ottoman Empire in Hungary. However, he could not prevent Suleiman I from attacking Corfu in 1537, drawing Venice into a war with the Ottomans. He died in 1538.