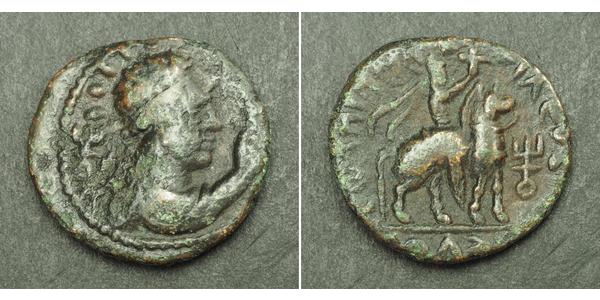 The Kushan Empire (Ancient Greek: Βασιλεία Κοσσανῶν; Bactrian: Κυϸανο, Kushano) was a syncretic empire, formed by the Yuezhi, in the Bactrian territories in the early 1st century. It spread to encompass much of Afghanistan,[16] and then the northern parts of the Indian subcontinent at least as far as Saketa and Sarnath near Varanasi (Benares), where inscriptions have been found dating to the era of the Kushan Emperor Kanishka the Great. Emperor Kanishka was a great patron of Buddhism. He played an important role in the establishment of Buddhism in the Indian subcontinent and its spread to Central Asia and China.

Vima Takto or Vima Taktu was a Kushan emperor who reigned c. 80–90 CE.

Vima Takto was long known as "The nameless King", since his coins only showed the legend "The King of Kings, Great Saviour", until the discovery of the Rabatak inscription helped connect his name with the title on the coins.

Vima Takto's empire covered northwestern Gandhara and greater Bactria towards China, where Kushan presence has been asserted in the Tarim Basin. Under his reign, embassies were also sent to the Chinese court.

He is mentioned in the Chinese Historical Chronicle of the Hou Hanshu, in relation to his father Kujula Kadphises:

"Qiujiuque (Ch: 丘就卻) [Kujula Kadphises] was more than eighty years old when he died. His son, Yangaozhen (Ch:閻高珍) [probably Vema Tahk(tu) or, possibly, his brother Sadaṣkaṇa], became king in his place. He defeated Tianzhu [North-western India] and installed Generals to supervise and lead it. The Yuezhi then became extremely rich. All the kingdoms call [their king] the Guishuang [Kushan] king, but the Han call them by their original name, Da Yuezhi."

A later inscription found at Vima's sanctuary at Mat, also records that he was the grandfather of Huvishka.